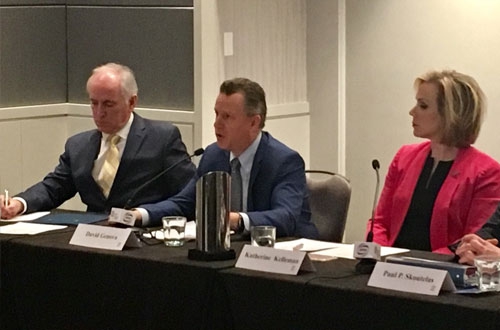 Public transit officials nationwide spoke out at a March 19 press briefing to express strong opposition to deep cuts to public transit in the Trump Administration's proposed budget for fiscal year 2019.

The American Public Transportation Association (APTA) notes that if such cuts are implemented, the cuts would threaten 800,000 jobs, including 502,000 construction jobs and related positions; in addition to 300,000 long-term roles associated with economic productivity.

“The proposed budget cuts to public transit will affect accessibility for millions of Americans across the nation that rely on our bus and rail systems to get to and from jobs, healthcare and education,” said APTA Chair and Jacksonville Transportation Authority CEO Nathaniel P. Ford Sr. “Without this funding, projects that rely on Capital Investment Grants will not be implemented and communities will suffer.”

APTA said the proposed cuts could also lead to a potential loss of $90 billion in economic output, according to an analysis prepared by the Economic Development Research Group for APTA.

“Cutting investments in America’s public transit infrastructure to fund an infrastructure initiative is like robbing Peter to pay Paul,” said APTA President and CEO Paul P. Skoutelas. “However, we are encouraged that lawmakers on both sides of the aisle support increased investments in public transit that will boost our economy and the quality of life in our local communities. We are calling on Congress to reject these budget cuts.”

“These projects also have local and state funds committed with the expectation that the federal government will fulfill its financial obligations promised in the 2015 Fixing America’s Surface Transportation (FAST) Act, which was overwhelmingly approved by bipartisan votes of 83-16 in the U.S. Senate and 359-65 in the House of Representatives,” APTA said.

“Puget Sound taxpayers have done their part to keep commuters and our economy moving by adopting the most ambitious transit expansion program in the nation,” Rogoff said. “They reasonably expect the continuation of the long-time federal funding partnership that is needed to complete transit extensions on time and accommodate the 1.2 million new jobs that we know are coming to the region in the years ahead….We look forward to working with the Administration and Congress to get these projects built.”