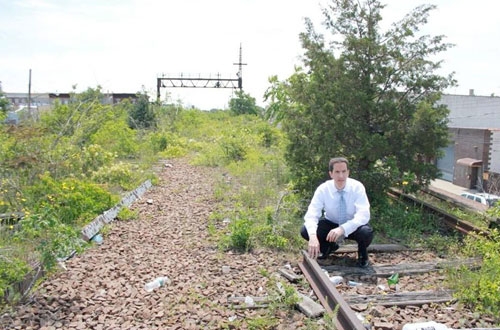 Assemblyman Goldfeder wants the MTA to apply for funds from a recently-announced NYSDOT infrastructure grant to fund a comprehensive feasibility study into reactivation of the rail spur.

“Families in southern Queens and Rockaway suffer from some of the longest commutes in the entire city. The state’s new passenger rail grant program has the potential to bring an end to our transportation desert. By funding a feasibility study into reactivating the Rockaway Beach Rail Line, we can work to create a true north-south rail corridor in Queens, improve transit access to our airports and take thousands of cars off the road,” said Assemblyman Goldfeder.

In a letter written to MTA Chairman Thomas Prendergast, Goldfeder urged the agency to apply for the 2015 Passenger and Freight Rail Assistance Program grant to fund a comprehensive feasibility study into reactivating the Rockaway Beach Rail Line.
According to the program’s application guidelines, the state is making up to $10 million dollars in funding available for passenger rail projects. These grants, Goldfeder noted in his letter, may go towards the costs of preparing design and plan specifications for the rehabilitation of tracks, as well as fund cost estimates and environmental impact studies.

The assemblyman also wrote that his proposal to utilize the line’s existing track and right-of-way meets the program’s requirement to fund projects that achieve goals of the NYS Smart Growth Public Infrastructure Policy Act. According to the program, this act seeks to advance “projects for use, maintenance or improvement of existing infrastructure” and promote sustainable growth. Citing a 2014 study by Queens College estimating up to a half a million trips per day on the reactivated line, Goldfeder argued that reactivating the line could meet these goals by taking thousands of cars off the road and reducing traffic congestion and air pollution. Goldfeder also noted that in its 2014 Transportation Reinvention Commission report, the MTA had previously proposed utilizing unused rail rights-of-way to increase transit options in the region.

The 2015 Passenger and Freight Rail Assistance Program announced earlier this month commits $17 million to critical improvements at rail and port facilities across New York State. According to NYSDOT, projects will be selected based on the ability to address areas of economic development and sustainability, how well they support the broad initiatives of the State Rail Plan and the overall public benefit relative to project costs.

The Rockaway Beach Line was put into service in the late 19th century under the control of the Long Island Rail Road. It provided residents with access to other parts of the city and 40 minute commutes to midtown Manhattan from Rockaway. In the early 1960s, parts of the railroad service were condensed, sectioned off and eventually closed. In the following years, communities surrounding the line have seen dramatic increases in population, with the Rockaway Peninsula population nearly doubling.

“I urge the MTA to apply for these funds and take advantage of this valuable opportunity to improve our vital transportation infrastructure,” said Goldfeder.