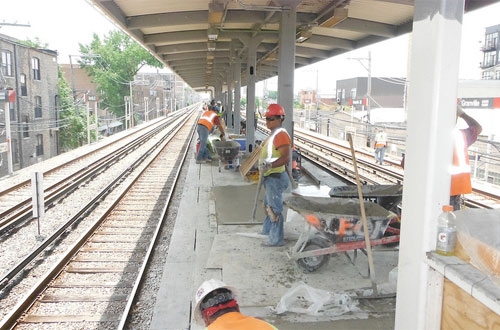 The Chicago Transit Authority granted approval to begin the process of acquiring property near its 95th/Dan Ryan Terminal on Chicago's South Side as part of the 95th Street Terminal Improvement Project. The project is an estimated $240-million initiative that will expand and improve the 95th/Dan Ryan Terminal. The nine properties identified for acquisition are located directly off the expressway and are primarily commercial properties with a few vacant lots. This allows the CTA to begin the acquisition process, subject to the requirements of federal and state law. Any purchase of a property by CTA, whether by negotiation or court order, cannot take place without subsequent board action. The 95th/Dan Ryan Terminal is one of CTA's busiest, with 24-hour Red Line service and more than 1,000 CTA and Pace bus trips on a typical weekday. The current configuration does not have adequate capacity to efficiently serve customers, which number around 20,000 on an average weekday.

The terminal design process is anticipated to begin later this year. Construction is expected to begin in 2014. Funding is provided through a variety of federal, state and local sources.

The CTA also approved the award of a contract for the Red Line South reconstruction.

The project, which begins in spring 2013, will completely rebuild the 43-year-old Red Line South, including all track, ties, ballast and drainage systems, from Cermak/Chinatown to 95th Street.

Kiewit Infrastructure Corporation of Chicago submitted the lowest bid for the trackwork component of project at $220.1 million and was found to be the most qualified. The bid was below project estimates and the next lowest bidder was 20 percent higher than Kiewit’s submission.

Kiewit also slightly exceeded the CTA’s target of 28 percent Disadvantaged Business Enterprise (DBE) participation, reaching 29.3 percent, by engaging the services of 23 DBE subcontractors, more than 50 percent of which are based in Chicago.

CTA is currently soliciting proposals for the station improvement portion of the project, which includes the renewal and improvement of the eight stations along the project footprint. Improvements will include three new elevators at the Garfield, 63rd and 87th Street stations, painting and lighting, bus bridge improvements and new roofs and canopies at some stations. CTA has established a 40 percent DBE participation goal for station work.

The overall estimated budget for the project, including design, construction and additional CTA service, is $425 million. The project is part of more than $1 billion in federal, state and local funds being invested in the Red Line.