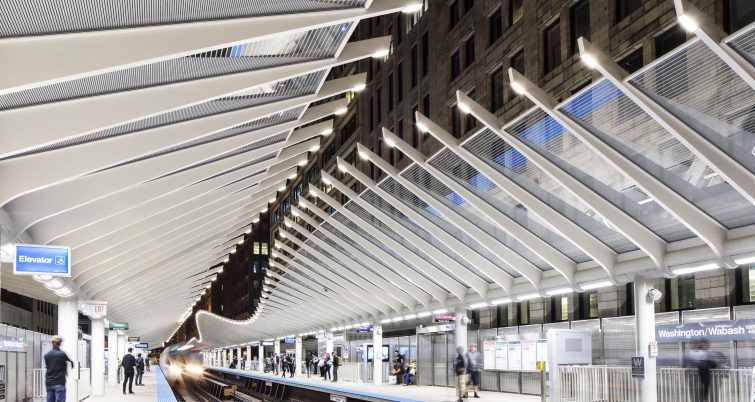 The CTA’s Washington/Wabash station was recognized last week for its unique architecture. | Photo courtesy of American Institute of Architects

The Chicago chapter of the American Institute of Architects announced this week its 2018 Design Excellence Award winners, among which was the Chicago Transit Authority’s (CTA) Washington/Wabash CTA station, located in Downtown Chicago.

The CTA station was recognized with the Distinguished Building Award – Honor Award, AIA said. The organizations involved in its development include the Chicago Department of Transportation and the CTA. FH Paschen acted as general contractor for the project, which was completed in 2017.

“Architecture firm EXP reimagined the concept of the busy station, creating an elegant canyon that stretches down the city’s historic Wabash Avenue,” a statement said. “Wave-like canopies are juxtaposed against the angular backdrop, elevating the station from a functional checkpoint to public sculpture.”

AIA said the architecture of the Washington/Wabash CTA station canopies is appealing because it is “simple, elegant and economical.”

“The skeletal steel and faceted glass structure create a dynamic play of light alluding to diamond facets and the immediate Jeweler’s Row context,” AIA explained. “From the platform, the canopy serves as a deliberate contrasting frame that captures views to the historic Wabash façades.”

AIA said 12 nationally-renowned architects sat on the juries and evaluated hundreds of entries before choosing the winners. Honor awards, such as the one awarded to the CTA station, are intended to denote the AIA’s highest distinction, emphasizing that the Honor Award recipients embody all elements of excellent design.

“Each year, we are proud to honor Chicago architects who continue to meet ever-changing project demands with progressive approaches that not only pay homage to rich architectural traditions but also address evolving global and cultural shifts with diverse and innovative solutions,” said AIA Chicago Executive Vice President Zurich Esposito.