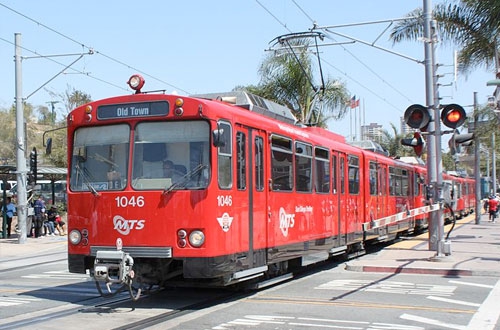 SANDAG said the 10.92-mile light-rail extension, referred to locally as the Mid-Coast Trolley, is the largest public transit project in the history of the San Diego region. The extension will include nine stops and will serve major activity centers such as Old Town, Mission Bay Park, the Department of Veteran’s Affairs Medical Center, UC San Diego and the Westfield UTC shopping center. Officials estimate the project will serve 24,600 transit trips every weekday, with service anticipated to start in 2021.

“FTA is proud to partner with San Diego to bring new transit options to this growing region,” said FTA Acting Administrator Carolyn Flowers. “With the population along the Mid-Coast corridor expected to grow nearly 20 percent in the coming decades, this trolley extension will offer a much-needed alternative to traffic congestion in the years ahead.”

With the signing of the federal grant agreement, FTA is committing a total of $1.04 billion through its Capital Investment Grant Program to the $2.17 billion Mid-Coast Corridor Transit Project. In addition to the $100 million that was awarded with the signing of the grant agreement on Sept. 14, the remaining federal funds will be provided over the course of 10 years on an annual payment schedule, subject to congressional approval during the annual appropriations process.