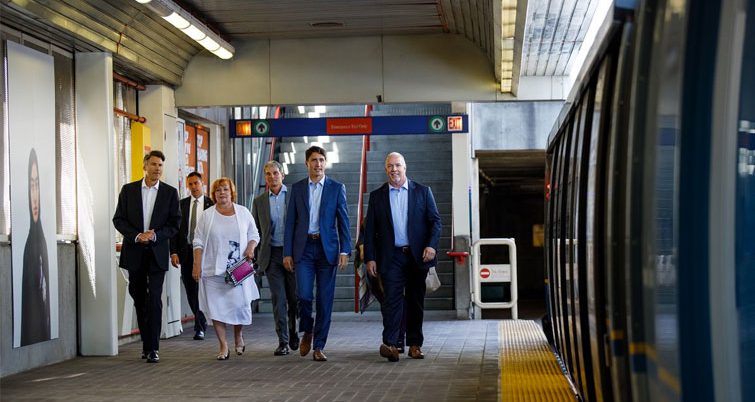 Credit: Office of the Prime Minister of Canada

Canada’s federal government and the province of British Columbia have reconfirmed more than $C 3bn ($US 2.28bn) in funding for two rapid transit projects in metro Vancouver: the Broadway Subway project and the Surrey – Newton – Guilford light rail line.

The announcement by Canadian prime minister, Mr. Justin Trudeau, and the premier of British Columbia, Mr. John Horgan, on Sept. 4, in effect confirms both government’s approval of the business case for the projects, which are proposed under Phase 2 of the federal government’s $C 120bn Investing in Canada infrastructure initiative.

The Broadway project will add 5.7km and six stations to the existing SkyTrain Millennium Line, running west from VCC-Clark Station to Arbutus Street. The extension is expected to increase capacity on the corridor by 250% compared with the existing bus service and in total the project will cost around $US 2.83bn.

The province of British of Columbia will deliver the project, contributing $C 1.82bn to the total cost, with the government of Canada providing $C 888.4m, and the City of Vancouver $C 99.8m through an in-kind land contribution.

Procurement for the Broadway project, which will be delivered under a design-build-finance model, will begin this autumn, with construction expected to start in 2020 and be completed in 2025. The extension is expected to serve 140,000 passengers per day and offer a journey time of 11 minutes.

The 10.5km Surrey light rail project will cost $C 1.65bn and include 11 stations, offering a journey time of 27 minutes. Greater Vancouver Transportation Authority (Translink) will employ a design-build-vehicle supply-finance-operate-maintain-rehabilitate model for the line, which it will operate for seven years. Translink and regional funding will account for $C 1.12bn of the total cost with the federal government providing $C 483.8m. Procurement will begin this week with construction expected to occur between 2020 and 2024.

“Bringing light rail to Surrey will transform the city, connect communities and make getting around the Lower Mainland faster and easier,” Trudeau says. “The Broadway Subway will also go a long way in reducing commute times and transit overcrowding, and making Vancouver’s SkyTrain even more convenient and accessible.”

For a detailed breakdown of rail projects from around the world, subscribe to IRJ Pro.