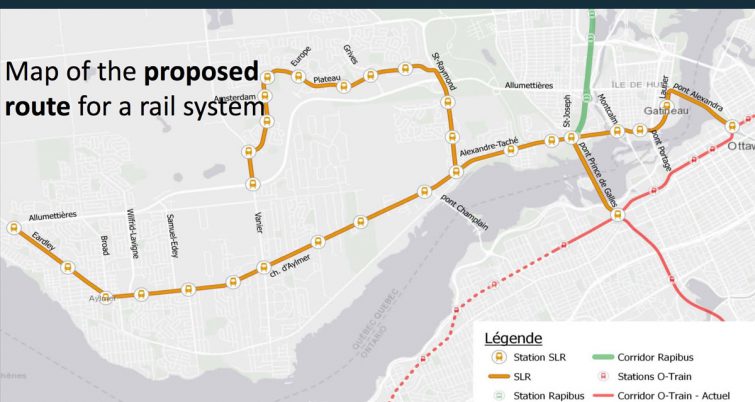 The city of Gatineau, Quebec, has proposed an ambitious 26-kilometer (16.12-mile) light-rail system that will help promote movement of the population in the western portion of the city to downtown Gatineau and Ottawa, Ontario.

Gatineau sits on the Quebec-Ontario border and 40 percent of its labor force commutes into Ottawa daily. Should the project come to fruition, officials believe it would reduce the number of buses in downtown Ottawa by 60 percent.

Gatineau officials say the light-rail project is needed to meet the demands of a growing city with a maxed out road network that has little opportunity to increase capacity. Light-rail, the city says, will establish a modern public transit network to better structure development and to better respond to transportation issues in the west sector of the city.

“Today, we are introducing a public transit project, but it’s a lot more. The project we are putting before you is ambitious, it will give us economic strength, structure our urban development, in fact, [it] will redefine Gatineau’s development model and help us protect our environment. It is a project in the image of our city: green, modern, ambitious,” said Gatineau Mayor Maxime Pedneaud-Jobin during the presentation of the project.

The system would include 26-kilometer (16.12-miles) of rails along two main routes from the north and from the south. In the north, the system would follow the path from Vanier to boulevard du Plateau to boulevard Saint-Raymond, while in the south the line would begin on Eardley to rue Principale, chemin d’Aylmer, boulevard Alexandré-Taché and to rue Laurier. The system would create a loop with Ottawa’s O-Train by running on two bridges. The eastern portion of the system would run on the Alexandra Bridge and link downtown Gatineau and downtown Ottawa and the Prince of Wales Bridge would link the systems in the west.

Gatineau officials say the light-rail system will be 100 percent electric and run every five minutes during peak service and every 15 minutes during nights and weekends. Project costs are estimated at CA$80 million (US$60.14 million) per kilometer, including rolling stock and related investments (maintenance center and other technical elements), which brings the total estimated cost to CA$2.1 billion (US$1.6 billion). Officials said the estimate is derived from an analysis of 20 similar projects completed or underway across Canada.

Service could begin on the system in 2028.