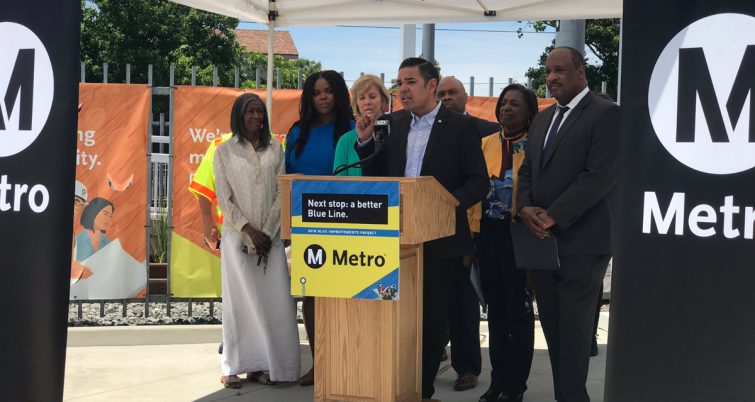 Long Beach Mayor Robert Garcia and LACMTA officials announced May 29 the completion of construction improvements to the southern portion of the LACMTA Blue Line. | Photo courtesy of City of Long Beach/Twitter

The Los Angeles County Metropolitan Transportation Authority (LACMTA) is celebrating its progress on the New Blue Improvements Project, which the authority states has reached its halfway mark toward completion.

With an investment of $350 million, the ongoing project to bring LACMTA’s oldest light-rail line up to date and into a State of Good Repair is now halfway complete, the agency stated.

“This critical project is one of the largest single investments that [LACMTA] has made as part of our State of Good Repair program,” said Tim Lindholm, executive officer for Capital Projects. “It is an investment in the future of our system that will ultimately save time for riders, improve the customer experience and save money for the agency by increasing the lifespan of our equipment and reducing costly breakdowns and delays.”

LACMTA said the authority is expanding its transit system following the M sales tax ballot measure approved by L.A. County voters in 2016. The sales tax measure allocates a funding stream to State of Good Repair work, as well, which officials said is unique among the nation’s transit ballot measures.

The LACMTA Blue Line opened in July 1990 and stretches for 22 miles between downtown Long Beach to downtown Los Angeles. It has historically been the authority’s busiest light-rail line and has averaged more than 60,000 weekday boardings in 2018.

Work to modernize the Blue Line has been ongoing since 2014, officials said, through a series of safety and operational improvements that culminated in this year’s work.

The current work on the southern section of the line began in January and ends on June 1, when work on the northern section will begin. As part of the project, the Willowbrook/Rosa Parks Station — the fourth busiest rail station in the LACMTA system — will also be closed for eight months for a complete rebuild from the ground up.

The Blue Line work being completed this year includes: