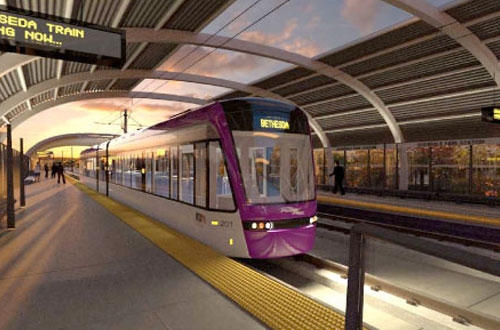 “Over the past four years, the MTA’s Purple Line team has led an extensive public outreach effort with local citizens, businesses and agency partners to ensure we are designing a project that minimizes community and environmental impacts while delivering improved accessibility and transit connectivity that gets people to where they want to go,” said MTA Administrator Robert L. Smith. “Public feedback is an essential element of how we do business, and we encourage citizens to give their input on the findings in the FEIS.”

Beginning September 6, the public will have the opportunity to review the 10 chapters of the FEIS and comment on all aspects of the document, including the alternates considered, transportation and environmental impacts, and plans for implementing the construction of the proposed east-west light rail line in Montgomery and Prince George’s counties. Comments will be collected and provided to the FTA, which will then issue a Record of Decision on whether to move the project toward further design development and the right-of-way acquisition process.

“We are looking toward this fall’s decision with optimism,” said MTA Executive Director for Transit Development and Delivery Henry M. Kay. “With federal environmental approval, we will be able to move the Purple Line forward and be one step closer to receiving federal construction funds.”

The Purple Line is a proposed $2.2 billion, 16-mile, 21-station light-rail line that would provide connections to major business districts and activity centers in Bethesda, Silver Spring, Takoma/Langley Park, College Park/University of Maryland and New Carrollton, as well as link to Metrorail’s Red, Green and Orange lines. The average daily ridership in 2040 is anticipated to be more than 74,000.