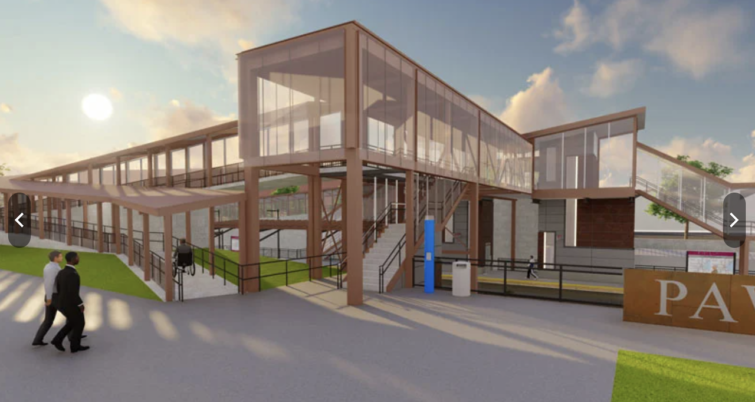 The new transit center will allow riders to easily switch modes of transportation between MBTA’s commuter rail service and RIPTA’s bus network, according to a release.

“This new station will not only add to the quality of life in Pawtucket and the Blackstone Valley but it will also dramatically expand transit options for Rhode Islanders and those visiting Rhode Island,” said Gov. Dan McKee. “With easy connections to and from Boston – the opening of this station continues our momentum, breathing new life into Pawtucket and Central Falls.”

In an emerging area of transit-oriented economic development in Pawtucket and Central Falls, the rail-bus transit center will provide a robust combination of commuter rail and bus service, officials said.

The new transit hub is expected to make it easier for Rhode Island commuters traveling to and from Boston and other Massachusetts destinations to access bus and train service, as well as helping to reduce traffic congestion and greenhouse gas emissions, a release said.

The new rail station in Rhode Island will supplement three other stations—Providence, T.F. Green and Wickford Junction—serviced by the MBTA, with multiple stops in Massachusetts on the route to South Station in Boston.

MBTA Interim General Manager Jeffrey Gonneville said the MBTA is excited to broaden the reach of its commuter rail network.

“The Providence/Stoughton Commuter Rail Line will begin making regular and convenient stops on weekdays and weekends at the new Pawtucket-Central Falls Transit Center later this month, offering efficient service to and from South Station in downtown Boston,” Gonneville said.

The station features dedicated platforms for northbound and southbound service, which are linked by a glass-enclosed pedestrian bridge, elevators, ramps, and stairs. The transit center’s design also incorporates composite panels and covered waiting areas. On the Barton Street side of the rail corridor, there is a separate drop off area as well as a set of stairs and ramps to the platform, according to a news release.