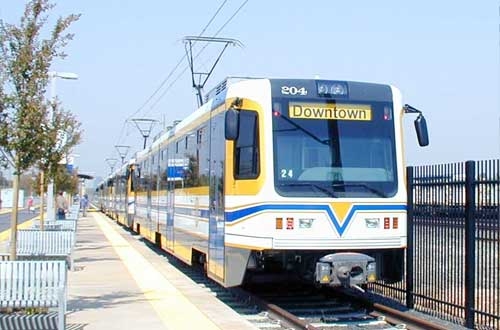 The Light Rail Modernization Project has three major components, which include:

The CTC awarded the Placer-Sacramento Gateway Corridor project $67 million including over $33 million to SacRT to assist with the Light Rail Modernization Project from the Solutions for Congested Corridors Program (SCCP).

SacRT was awarded $33.87 million from the SCCP, which will help fund all three major components of the Light Rail Modernization Project, the purchase of new low-floor light rail vehicles, low floor station conversions and a major facility improvement. The funding will help purchase eight new low-floor light rail vehicles to replace eight high-floor vehicles that are past their useful life.

This funding will also help with the conversion of four stations on the Blue Line from Cathedral Square to the Watt/I-80 Stations, which includes raising the platform up at least eight inches to allow for automatic ramp deployment from the new low-floor light rail vehicles. There are a total of 12 stations on the North Eastern Corridor of the Blue Line that will need to be improved to operate the new low-floor light rail vehicles. This funding will also help in making major improvements to the Watt/I-80 Light Rail station and bus station.

SacRT will combine the $1.6 million of LPP funds with the $23.6 million Transit and Intercity Rail Capital Program (TIRCP) funding that was awarded to SacRT earlier this calendar year to support the purchase of eight new low-floor light rail vehicles to replace vehicles that have passed their useful life. Low-floor light rail vehicles will produce operational efficiencies by speeding up train run times and optimizing boarding convenience and safety along with needed increased capacity.

“This funding will be critical to improving quality of life and accessibility by providing more access points for those using mobility devices on our light rail system,” said SacRT General Manager/CEO Henry Li. “This significant investment in the modernization of the region’s transit system shows tremendous confidence in Sacramento’s growing economy and ability to rebound after the COVID19 pandemic.”

“As we work to recover from the COVID-19 pandemic, public transit is crucial to keep our economy moving in the right direction,” said Congresswoman Doris Matsui. “This announcement is an exciting step to continue modernizing our light rail lines and make sure that Sacramento has safe, reliable, and efficient public transit well into the future. I applaud SacRT for continuing to push forward on important projects like these that build upon their work to drive economic growth and bring greater transportation equity to our region.”

“Congratulations to Sacramento Regional Transit in your success of securing additional resources so desperately needed,” said Dr. Richard Pan, State Senator representing the Sacramento region. “These projects would help lower greenhouse gases and vehicle miles traveled by our communities, provide reliable public transportation for our daily commuters, and ensure that we are lowering our carbon footprint as a region.”

“These funds are essential to keep our region moving forward to serve the needs of our riders, especially as we look beyond the COVID-19 pandemic,” said SacRT Board Chair and Sacramento City Councilmember Steve Hansen. “Our light rail modernization project is a game-changer to transportation in our region that will bring more reliability, comfort, and reduce mass congestion and green house gas emissions.”

“The funding SacRT received will continue to accelerate the light rail modernization program that will improve the passenger experience,” said SacRT Board Director and Sacramento County Supervisor Phil Serna. “I am pleased funding was included to renovate and upgrade the Watt I-80 Light Rail Station/Transfer Center and this will serve as a catalyst for reinvestment along the Watt Avenue corridor.”

SacRT was previously awarded $184.5 million in state and federal funding for the $610 million Light Rail Modernization Project. SacRT has awarded a contract to Siemens Mobility in Sacramento to manufacture up to 76 new low-floor light rail vehicles. A Notice to Proceed was signed in April 2020 for 20 new low-floor light rail vehicles, which will begin being delivered in early 2023.