The Kankakee River Bridge located in Wilmington, Ill., was part of the state of Illinois’ $1.7 billion high-speed rail program running between St. Louis and Chicago. The scope of the project was to upgrade from an existing single main to double main as well as replacing three rail structures originally constructed in the early 1900s.

The critical path and main artery of the project involved building the eight-span, 604-ft-long rail bridge spanning the Kankakee River. The proposed structure would be built adjacent to the existing bridge through two stages of construction in order to provide minimal impact to existing rail traffic. The project included many aspects of heavy construction along with the new rail bridges such as upgrading three at-grade crossings, jack and bore utility relocations and extensive in-stream cofferdam work.

What sets this project apart from similar in-stream construction efforts was outside-of-the-box thinking to tackle permitting restrictions as well as the contractors unique approach to modular cofferdam systems in the waterway. Along with these factors, successful acceleration and scheduling produced a great finished project in a short amount of time. 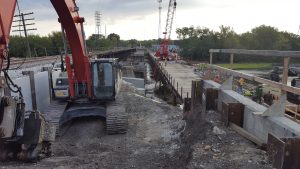 The Kankakee River Bridge project was part of the state of Illinois’ $1.7 billion high-speed rail program running between St. Louis and Chicago.

The previous Kankakee River Bridge spanned across the river for over 105 years, originally constructed in 1913. The old bridge was a five-span, open deck design with wood ties resting on two massive steel girders per span. The girders sat atop four large limestone block piers with spread footings resting on the bedrock bottom of the Kankakee River. The footings and piers for the new structure were constructed adjacent to the existing bridge with the footings being embedded 2 ft into the bedrock. The piers utilized riser blocks for staged construction without taking the existing main out of service until the new structural steel was in place and the new track was cut into its proposed alignment. In order to construct the permanent Kankakee River Bridge, a temporary work bridge also was built across the river. The temporary bridge allowed for the efficient transportation of equipment and materials needed to build the new piers and footings.

As with any in-stream project, proper permitting was obtained to allow for new construction in the waterway. However, the same permits which allowed for the construction of the new bridge in the Kankakee River also created access and time constraints. There were two major permits acquired for the project and each dealt with different aspects of in-stream work. The Army Corps of Engineers permit pertained to more of the environmental aspects of the work in the waterway. The permit required monitoring of in-stream construction activities and the use of turbidity curtains to minimize impact and contain any sediment released from in-stream work. A major hurdle with the Army Corps permit was that it restricted access into the river. Permit conditions called for the use of extensive causeways in order to transfer equipment into the Kankakee River as well as the use of large stone work pads. It was essential to place equipment into the Kankakee River to efficiently construct not only the temporary work bridge but the permanent piers as well. The project manager was able to work with the Army Corps to make an addendum to the permit involving the use of biodegradable hydraulic oil in all in-stream equipment. The contractor installed the biodegradable fluid into all of their in-stream equipment and built an armored ramp of clean stone along the shoreline of the Kankakee River. The ramp allowed for equipment access from the shoreline directly onto the bedrock bottom of the river. Entering the water along the shoreline was a main culprit of sediment disturbance and armoring the slope greatly minimized the amount of sediment released into the waterway.

Once the access problem was resolved, the next major hurdle related to the acquisition of the Illinois Department of Natural Resources permit (IDNR). The IDNR permit pertained to the overall impact to the flow and upstream water elevations of the river. Upon meeting with the IDNR, crews learned of Wilmington’s history of ice jams, which are common to the Kankakee River during the colder season. The ice jams have a history of causing flooded conditions and the IDNR required the temporary work bridge to be completely removed from the Kankakee River prior to the winter months. IDNR required a draft of both a 100-year flood mitigation plan and emergency ice jam removal plan. Once both plans were approved, the contractor would need to accelerate their construction efforts in order to complete the first stage of the proposed Kankakee River Bridge before the end of the year.

ICC Group’s accelerated construction of the Kankakee River bridge was an impressive feat and was achieved with intelligent scheduling as well as a little help from mother nature. ICC Group was able to construct its 16-span temporary bridge, the nine piers and risers for the permanent structure and a set of 10 spans of structural steel to complete the first phase of bridge construction all within 90 in-stream working days. 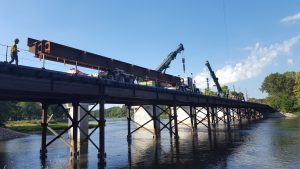 The first phase, which included a temporary bridge, was done in 90 days.

The weather late in the year cooperated and no major rainfall events meant water levels remained manageable during construction. Once construction of the temp bridge started, ICC Group’s goal was to work their way up out of the water by pouring footings and piers as quickly as possible. If the footings and piers could be constructed, the temporary work bridge provided access to finish the risers and structural steel without being effected by heavy rainfall events that would cause the Kankakee River to spike in water elevation and flow.

To accommodate this rapid construction, an additional addendum was made to the IDNR permit. The permit originally limited the number of cofferdams allowed in the river to two. During construction the impact of ICC Group’s modular cofferdam system was realized to be much less than what was originally proposed in the plans. We were able to prove that ICC Group could use three of their smaller, modular cofferdams and still impact the flow of the Kankakee River less than what was originally planned. This concept was illustrated to the IDNR and once they approved it, it allowed for concrete forms to be placed much more effectively.

By having three cofferdams, the contractor was able to always have a location to set forms. They could be stripped from one pier (after achieving the required break strength and cure) and immediately placed on the next footing. The third cofferdam allowed the contractor to always be one step ahead with his footings.

Equally as impressive as the successful acceleration was that the contractor was able to do so without any major reportable injuries.

After each standard morning briefing, ICC would hold a secondary briefing to cover relevant safety topics pertaining to the days scheduled tasks. Standard in-stream safety practices were followed such as the use of life jackets and boats for recovery. ICC also used large concrete blocks and strategically placed equipment to break the current for their workers when setting the required cofferdams.

Three that were unique

ICC spent a considerable amount of effort in the preconstruction phase of the project, planning and strategizing their access, logistics, and schedule.

Three unique construction methods that helped ICC successfully construct phase 1 in the narrow timeframe required by the IDNR permit were the contractor’s influence on the design of the temporary bridge and work platform, the modular cofferdam system, and some unique equipment attachments.

ICC worked closely with Westbrook Associated Engineers, Inc. out of Spring Green, Wis., in the constructability and design of the temporary bridge. The temporary bridge consisted of 15 pile bents with 16 spans at 40 ft each for a total of 640 ft in length. Temporary bridges are fairly common in bridge construction over waterways, however it was how ICC’s team cleverly designed how the 15 pipe pile bents would be anchored into the bedrock that provided the efficiency and production necessary to contribute to the advancement of the schedule.

The 1.25-in.-diam. threaded anchors for the temp bridge columns were designed to be much longer than necessary, approximately 8 ft long in total with a 3-ft embedment in the rock. An underwater epoxy system was used to secure them in the bedrock. This allowed ICC to bolt them to a plate above the typical water line of the river, and provided ICC with easy access to very quickly and efficiently disassemble the temp bridge. ICC also custom fabricated a very thick heavy wall pipe about twice as long as the anchor bolt projection and welded a lifting lug attachment at the top. This heavy-duty pipe would slide down over the bolts. A cable was then attached to it from an excavator arm. The excavator would swing its arm left or right and it would snap the anchor bolt off cleanly at
the bedrock.

Secondly, the modular cofferdam system chosen by ICC allowed the contractor to quickly construct and dewater each cofferdam. The cofferdam system was composed of linear segments of 5-quantity, 1-cu-yd sand bags linked together. The inside of each bag has a 1-in. x 3-in. pine U-shaped frame. The bags are fastened together through this U-shaped frame. The bags are delivered compressed like an accordion. ICC filled the bags with sand utilizing a Bobcat and each five-bag unit weighed approximately 6.75 tons. Plastic tarps were floated in the water and the sand bag units were set on top. The tarps were then wrapped on the outside and over the top to further minimize water infiltration. The bags have rigging loops in the corners, and the manufacturer supplied a specialty hoisting device for the five-bag unit. The five-bag units were set with the Link Belt 460 excavator or a crane, depending on the location. In areas where the water was above the first row of bags, two rows would be placed on the bottom, with one row on top in a pyramid-like section. The bags were a one-time use item. Once no longer needed, the sand was donated to a masonry contractor with property adjacent to the site.

Finally, three unique equipment attachments were used on this project by ICC and expedited tasks that would have otherwise been very difficult and time consuming. A custom-fabricated modular sandbag hoisting device was supplied by the manufacturer Drips, LLC.

A very large 8-ft-diam. hydraulic rock saw attachment was used on a Link Belt 460 excavator in conjunction with an integrated GPS system to cut out the bedrock bottom of the Kankakee River in the wet for the proposed bridge pier footing embedment. This provided quick, clean cuts for each of the footings and set a consistent limit for rock removals. Rock bottom was very uneven and this really was the only efficient solution.

Finally, a custom-fabricated air drill attachment for a mini excavator was used to drill holes for the 180-quantity temporary bridge pier anchors. This attachment allowed ICC to quickly drill each of the 12-quantity, 3-ft-deep holes at each pier bent.