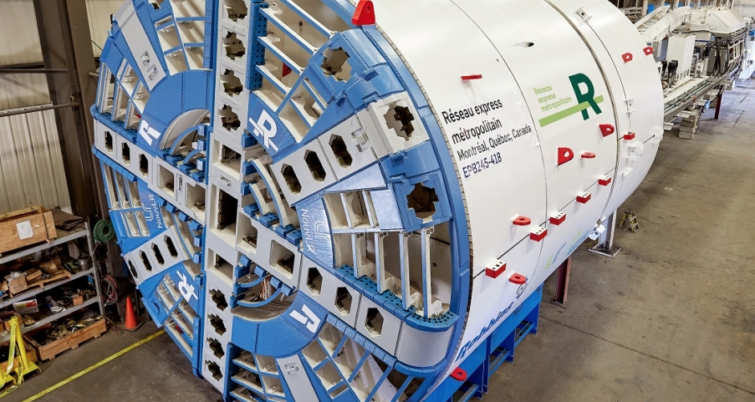 The tunnel boring machine for the REM project is more like an Earth-bound submarine.

A massive powerful machine can be delicate.

The tunnel boring machine assigned to the Montreal Reseau express metropolitan (REM) project, which was named Alice, has successfully completed the most complex section. It took almost two years to move through soft soil that lies underneath the West Island Technoparc wetlands and the Trudeau International Airport. The rest of the REM 67-mile line is being constructed above ground.

Tunnel borer manufacturer Robbins from Cleveland constructed the machine that is being described as an earth-bound submarine. It is a 155-meter-long “mobile factory” that included a team of operators, mechanics, electricians, and handlers. The submarine evacuated more than 300,000 tons of material.

The machine was created specifically to handle soft soil conditions that have water under pressure. The submarine controls the stability of the tunnel face and possible surface subsidence by monitoring and adjusting the pressure inside the cutterhead chamber with the pressure outside.

The machine also placed cylindrical prefabricated rings to serve as tunnels walls as it moved underground. A total of 1,800 rings made up of 12,600 segments were left behind. No concrete pours were needed for the tunnel section.

The project came across a few challenges. Liquid nitrogen had to be inserted into the soil to prevent a collapse in the wetlands. Some areas beyond the wetlands also contained the same sensitive material. The area was recharged by adding water gradually from hoses.

The $7 billion project will connect the surrounding suburbs to the city of Montreal.