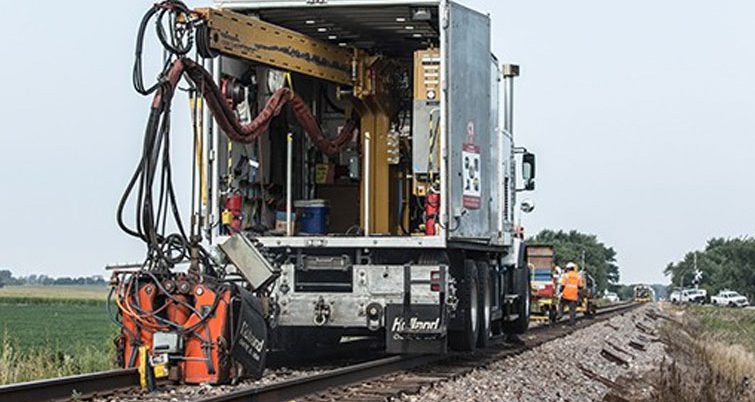 Flash-butt welding trucks would be exempt from the OSHA cranes and derricks standards under a proposed rule.
Holland LP

A proposed rule by the Occupational Safety and Health Administration (OSHA) would exempt many types of rail equipment from the final Cranes and Derricks in Construction rule, which was published in 2010.

The proposed OSHA revisions include two groups of exemptions: One for certain equipment with low-hanging attachments used to perform trackwork and a second for certain requirements applicable to all railroad machines used in track construction and covered by OSHA’s standard.

The proposed rule exempts flash-butt welding trucks, as well as “other railroad roadway work machines equipped only with hoisting devices used to suspend and move their workhead assemblies low and close to the rails.” OSHA’s proposed limited exemptions would also apply to work on the construction of railroad tracks and supporting structures, such as work on crossties, ballast, roadbed, poles or other structures where railroad signal devices and signage are mounted.

The rule does not exempt work or equipment performed on bridges as OSHA says the use of cranes and derricks on bridges exposes workers to the same hazards as in other construction work.

Also of note in the proposed rule is the exemption of railroad equipment operators from the certification requirements in the standard. Federal Railroad Administration standards address these operators and take precedent over OSHA standards.

Comments to the proposed rule can be submitted through Sept. 17, 2018, by mail, fax or electronically at http://www.regulations.gov.