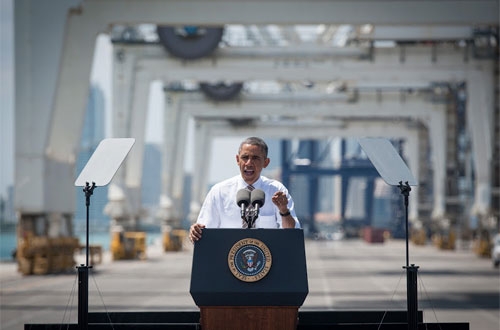 President Obama pushed his plan, the Rebuild America Partnership, to encourage private investment in public infrastructure while in Miami, Fla., touring Port Miami's tunnel project, which provides a direct connection between the port and major highway.

In a White House release on the plan, the administration said, “Since the President took office four years ago, America has begun the hard work of rebuilding our infrastructure: American workers have improved over 350,000 miles of U.S. roads and more than 6,000 miles of rail, and they have repaired or replaced over 20,000 bridges. But there’s more to do, and taxpayers shouldn’t have to shoulder the entire burden themselves.”

The plan takes a three-pronged approach, which includes calls for a $10 billion National Infrastructure Bank; builds upon the Build America Bonds program by issuing new American Fast Forward Bonds that will give state and local governments flexibility in infrastructure investment and additional funding for the Transportation Infrastructure Finance and Innovation Act (TIFIA) program and the Transportation Investment Generating Economic Recovery (TIGER) program.

The TIFIA program received an eight-fold increase in funding to $1 billion in the recent surface transportation reauthorization. Making sure this expansion is implemented is “a significant step towards more innovative infrastructure financing.”

Additionally, the administration is proposing $4 billion in new competitive funding for the TIGER and TIFIA programs in 2014. By doing this, the administration says new grant and loan funding would be available for states and localities across the country, giving them both a new source of financing and the flexibility to design projects and financing packages to meet their needs.

“You ask any CEO where we they rather locate their business and hire new workers. Are you going to set up shop in a country that’s got raggedy roads, runways that are pot-holed, and backed-up supply chains? Or are you going to seek out high-speed rail, Internet, high-tech schools, new state-of-the-art power grids, new bridges, new tunnels, new ports that help you ship products made in America to the rest of the world as fast as possible?” Obama asked the Port Miami crowd.