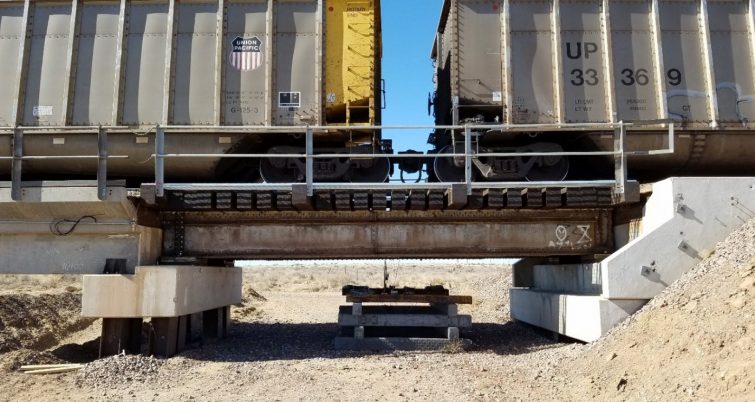 In late 2017, TTCI installed an open-deck 30-ft DPG span in place of a ballasted-deck prestressed concrete box girder span in the FAST state-of-the-art bridge, shown in Figure 1. This is now the fifth riveted steel DPG span installed at FAST.1 The span is in a 5° curve with 4 in. of superelevation. For this installation, the span was installed level while the deck ties are superelevated (see Figure 2). 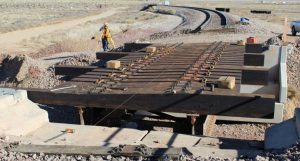 This contrasts to the previous installation1, where two spans were installed in a superelevated position.

The 30-ft span dates to 1912, originally built for the Denver & Rio Grande Railroad. It served until late 2016 on a busy main line carrying significant unit train traffic including coal and grain. Annual tonnage ranged from 70 to 100 million gross tons (MGT) during the past 20 years. The span was originally 32 ft in length. In order to fit the available opening at FAST, TTCI crews shortened the span by 2 ft. The excess length was all removed from one end of the span. The end diaphragm and top lateral brace had to be moved as part of the shortening process. The resulting span is a bit asymmetrical. Removing the excess length from both ends equally would have necessitated moving both end diaphragms and additional top lateral bracing, basically twice as much work.

As with the other riveted steel DPG spans at FAST, this one is being heavily loaded to provide additional data in support of the fitness-for-service effort for steel spans. The span rating is approximately Cooper E-61. The FAST train loading on this span (including unbalanced superelevation) is approximately E-72.

The superelevated glue-laminated deck ties are the first known installation of their type.

Normally, superelevation in deck ties is provided either by dapping or blocking. This also is the first known installation of glue-laminated deck ties in a curve. These ties are not dapped.

The steel span has a smooth top with no protruding rivet heads to imbed in the ties. Resistance to lateral movement is provided only by friction and the hook bolts.

The hook bolts used are a new style installed between the ties, rather than through the ties (see Figure 3). This is the first known installation of this style of hook bolt on a curve, with a smooth top span, and ties with no daps. 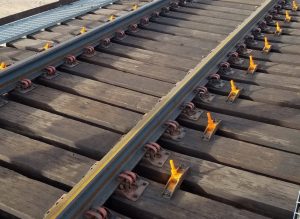 Figure 3. The hook bolts used are a new style installed between the ties, rather than through the ties.

This installation provides a good test of the lateral restraint capabilities of the between-the-ties hook bolt system.

The 30-ft riveted steel DPG span, the superelevated glue-laminated ties, and the between-the-ties hook bolt system have accumulated 235 MGT since installation at FAST. The span, ties, and hook bolts are all performing well. There has been no noticeable lateral movement of the deck ties on the span. Maximum measured stresses are about 7 ksi.

As with the other riveted steel DPG spans at FAST, the measured stresses are somewhat lower than values calculated theoretically using simple beam models. Normal FAST train operations are at 40 mph. Balanced speed for this curve is about 34 mph, so the girder on the high rail side normally experiences higher stresses than the girder on the low rail side.

The FAST train normally consists of three six-axle locomotives and about 110 freight cars with gross rail load of 315,000 lb per car.

In 2015, researchers from Purdue University and TTCI installed three notches in the tension flange of the open-deck 32-ft DPG span of the FAST West Steel Bridge, as described previously.1 As of this writing, the induced cracks have grown out of the notches in all three cases, each one about 0.1 in. beyond the notch. The notches and cracks are inspected daily prior to train operations. Magnetic particle inspections have been performed weekly. Thus far, crack growth has been very slow. Since the notches were cut into the tension flange, this span has accumulated 516 MGT (3.3 million load cycles) of heavy axle load traffic. All the safety systems and precautions previously described1 are still in place.

Overall the two open-deck riveted steel spans in the FAST West Steel Bridge have accumulated 631 MGT (4 million cycles) of heavy axle load traffic at FAST. They continue to perform well with no defects noted aside from the three notches intentionally installed.

On this span, a smaller version of the premium tie plate is installed. Previously this span had the glue-laminated ties,
the fiber-reinforced foamed urethane ties, and a variety of solid sawn ties, with standard hook bolts, standard tie plates, and cut spikes.

The train-operating crews at FAST report that the premium tie plates result in much quieter train operation over this bridge as compared to the previous deck with standard tie plates and cut spikes.

FAST tonnage over the new solid sawn ties, hook bolts, and the premium fasteners is 383 MGT.

TTCI gratefully acknowledges the support of the railroad bridge community, including the various suppliers, for their contributions and donations of spans and materials to this effort.