CN is requiring all Canadian employees to be vaccinated against COVID-19.
CN

On Saturday, July24, a Canadian National train hauling 99 cars derailed, putting a locomotive and 24 empty intermodal cars on the ground near Pointe au Baril, Ontario. A washout is considered the most likely cause, and two crew members received minor injuries.

CBC News reported that Transportation Safety Board of Canada spokesperson Chris Krepski said “The train was carrying 99 cars (57 Loads, 42 Empties), weighed 2942 tons and was 5,849 feet long. The TSB is not deploying investigators, but continues to monitor the situation, gather information and assess the occurrence.”

Other washouts were reported on Canadian Pacific and Canadian National lines in the area. 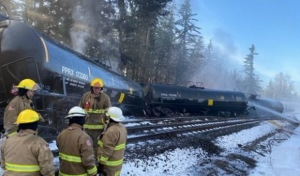