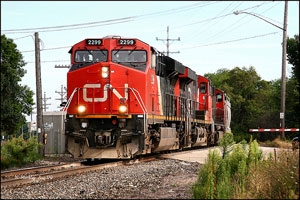 Canadian National (CN) is suspending the feasibility study for the construction of its proposed rail line and terminal handling facility to serve the Quebec/Labrador iron ore range.

The feasibility study was initiated last August by CN and its partner La Caisse de dépôt et placement du Québec (the “Caisse”), along with a group of six mining companies. The study has been progressing steadily over the past several months. However, the current market realities have resulted in anticipated delays with mine development projects in and around the Labrador Trough. A joint review of the project together with the mining companies indicates that mine construction schedules and diverging needs for each specific individual project will make it difficult to obtain the critical volumes of iron ore necessary to support the building of new rail and terminal infrastructure by CN.

The decision by some miners in the region not to join the group of mining companies supporting the CN infrastructure project is also a factor in the much-lower-than-projected iron ore volumes that are now expected to be shipped in the foreseeable future, CN said.

Luc Jobin, executive vice-president and chief financial officer of CN, said, “We have invested considerable effort and resources towards the feasibility study, but in light of the circumstances, CN has concluded that it is not advisable to continue with the feasibility study at this time.”