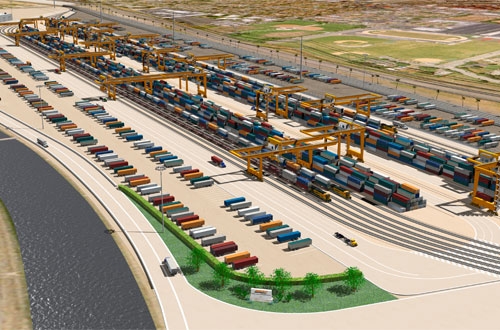 A rendering of the SGIC
Port of Los Angeles

The $500-million facility, located within four miles of the San Pedro Bay ports, will shorten the distance trucks loaded with cargo need to travel before transferring the containers to rail, instead of traveling 24 miles up the 710 Freeway. SCIG will support the competitiveness and accommodate forecasted growth of the Ports of Los Angeles and Long Beach, which handle more than 40 percent of the nation’s container cargo and account for more than one million jobs in California.

“We applaud the Los Angeles City Council, the Mayor’s Office and the Port of Los Angeles Harbor Commissioners for their commitment to green growth. With their input, BNSF’s SCIG project is setting a new standard of excellence in reducing emissions and realizing a positive impact on local communities,” said Matthew Rose, BNSF chairman and chief executive officer. “We appreciate the leadership of Mayor Villaraigosa and Councilman Buscaino and the support from a wide range of stakeholders to make today possible. We are investing more than $500 million in private funds to build this state-of-the-art facility, which will help keep the San Pedro ports competitive and we look forward to the jobs, air quality and traffic benefits the facility will bring to Southern California.”

While eliminating millions of truck miles from the 710 Freeway, BNSF will clean up an existing industrial site and replace it with a new intermodal facility featuring wide-span, all-electric cranes, ultra-low emission switching locomotives and low-emission rail yard equipment.

BNSF has agreed to contribute up to $3 million to the joint Port of Los Angeles-Port of Long Beach Technology Advancement Program to further the development of zero-emission goods-movement technologies.

The railroad will build a soundwall along the eastern side of the Terminal Island Freeway and plant intensive landscaping on both sides of the freeway.

BNSF has committed to create a local jobs training program and offer priority hiring for new jobs to qualified local job applicants. BNSF has signed a Project Labor Agreement worth $255 million with the Building and Construction Trades Council that will result in approximately 1,500 jobs per year during construction. By 2036, IHS Global Insight forecasts the facility will create 22,000 new direct and indirect jobs in Southern California, including 14,000 new direct and indirect jobs in Los Angeles.