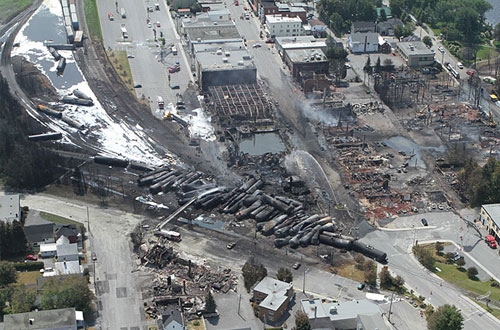 Few will forget that horrific day, July 6, 2013, when a crewless crude oil train with five locomotives and 75 loaded DOT-111 tank cars carrying volatile Bakken crude rolled into Lac-Mégantic, Quebec and derailed. The resulting fireballs and explosions (contrary to popular belief, the derailed cars did not explode; their contents ignited after the tanks had been breached) killed 47 people and a large section of the downtown area was destroyed. The tragedy’s aftermath, as well as accidents involving other CBR trains in the U.S. and Canada, led to a long regulatory process resulting in the stronger DOT 117 tank car as well as several changes to CBR operating regulations.

On Sunday, the government of Quebec announced that a rail bypass around Lac-Mégantic will begin construction next year, and should be finished by the fall of 2022. The Montreal Gazzette reported that the bypass will enable Lac-Mégantic to continue to benefit from rail freight service, while providing security from an event like the one in 2013. The bypass will be approximately eight miles long.

The cost of the bypass is expected to be about $133 million and Quebec will be responsible for about 40% of the cost. 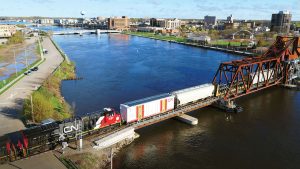