After being damaged by a vessel, Norfolk Southern's lift bridge spanning the Tennessee River in Decatur, Ala., is expected to remain out of service for up to five days, the railroad announced in a service alert on Jan. 17.

“A bridge strike was reported at Decatur Junction on the Memphis East Division disrupting service between Chattanooga, TN and Sheffield, AL,” a Norfolk Southern advisory said. “Our Engineering and Maintenance of Way teams have conducted initial inspections and early estimates are that the bridge will be out of service up to 5 days, with a restoration of service estimated for Saturday, January 21st.”

As of press time, it was unknown what struck the bridge. According to a Norfolk Southern representative, the railroad got an early report of a possible bridge strike and is investigating as bridges and engineering teams arrange repairs.

The railroad was planning to divert or cancel trains that were planned to pass through the region, as reported by Trains. In the meantime, Norfolk Southern cautioned customers to expect freight delays of 24 to 72 hours between the Southeast and Memphis, the Northeast and Memphis, and all points on Norfolk Southern to and from BNSF Railway and Union Pacific interchange at Memphis. The single-track bridge is also used by CSX Transportation, according to the report. 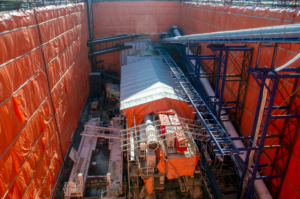