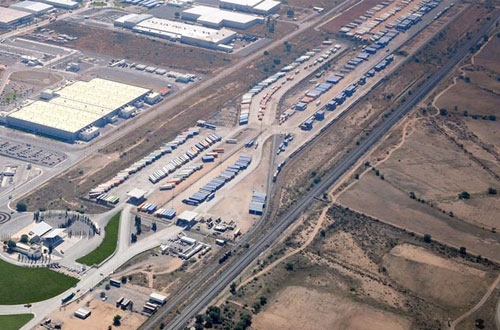 The terminal is strategically located on Kansas City Southern de Mexico’s mainline in SLP in the heart of Mexico and will have the capability to unload one unit train per day in Phase 1.

The main objective of this terminal is to receive a variety of commodities and handle and receive unit trains in order to serve the central region of Mexico under a Free Trade Zone.

“Logistics are key and whoever is able to get the products in the most cost efficient way will have an advantage on the market, especially on the refined products that will play a big role in Mexico now that the energy reform has taken place,” said Jorge Wade, director of the terminal for WTC Industrial.

The concept of this terminal was conceived in early 2013. Since then, permitting processes began and are nearing completion. Operations are scheduled to commence the later part of the fourth quarter in 2016 or early 2017.

“To comply with the regulations, this will be a public terminal where anyone can have access. This is why we chose a neutral terminal operator like Watco with the experience and knowledge to run the facility in a very efficient, safe and secure environment,” said Vicente Rangel, chief executive of Grupo Valoran, holding of WTC Industrial.

“KCS looks forward to serving this major fluids distribution and general cargo terminal in the heart of Mexico,” said KCS President Patrick Ottensmeyer. “We have a successful history of working with WTC and Watco and are excited about this unique opportunity to leverage all of our strengths to create the efficiencies and economies of scale that will benefit Mexico for many years to come.”

“The Watco Team is excited about this new partnership with WTC Industrial and KCS to develop a fuels terminal in a manner that best benefits the customer,” said Watco chief executive officer Rick Webb. “This is an expansion of Watco services that will bring great connections between existing U.S. and Canadian served refineries, terminals, ports and railroads. We believe this has strong growth opportunities for supplying fuels to the SLP region, the customers and the communities surrounding SLP.”