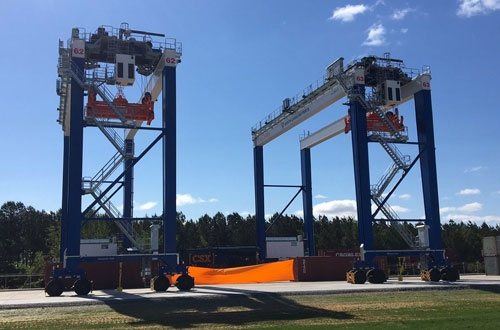 The South Carolina Ports Authority (SCPA) opened its second inland port, Inland Port Dillon, on April 16. SCPA says the facility was constructed to handle strong growth for the port's intermodal rail cargo volumes and deepen its reach into markets through the Carolinas to the Northeast and Midwest.

“Inland ports provide needed infrastructure in the interior of the state to support the movement of freight to and from our marine terminals,” said Jim Newsome, SCPA president and CEO. “The addition of Inland Port Dillon to the Port’s network diversifies our reach and enables port users to gain logistics efficiencies through rail transportation of their cargo. We’ve had tremendous support from the Dillon region to date and look forward to growing our cargo base for the facility.”

“CSX is pleased to be a key link in extending the South Carolina Port Authority’s reach from the Port of Charleston to the Pee Dee Region of South Carolina through establishment of Inland Port Dillon,” said Dean Piacente, CSX vice president of Intermodal. “We are confident that the Inland Port will promote economic development in the region and increase the competitiveness of the Port of Charleston and businesses throughout the State of South Carolina. CSX is proud of our role working together with the Port in converting the movement of containers from highway to rail, reducing highway congestion and providing environmental benefits to the citizens of South Carolina while promoting economic growth and commerce.”

The facility will handle the growing volume of container cargo traveling to and from the Port of Charleston via intermodal rail, which SCPA says has increased 180 percent increase since 2011. Today, nearly 25 percent of the port’s container volume moves by rail.

“Our ports system is one of the most important driving forces behind South Carolina’s recent economic success, and with the help of the Inland Port Dillon, it always will be,” said South Carolina Gov. Henry McMaster. “With two inland ports and the Port of Charleston soon to be the deepest on the East Coast, South Carolina has strategic advantages that no other state has and that will continue to pay off for the people of our great state.”