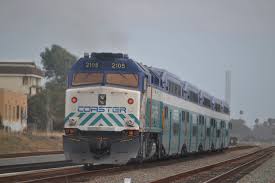 A proposal to construct railroad tracks in a bluff trench in Del Mar, Calif., is raising some eyebrows with the San Diego Association of Governments (SANDAG). Facial expressions, however, are not always a green light.

The trench for a commuter train route would be 26 ft deep and 55 ft wide and would feature straight vertical walls with enough room for two sets of trains tracks and an access road. SANDAG and other agencies want to line a 60-mile stretch from Orange County to the Santa Fe Depot in San Diego with two tracks. The proposed trench also would include pedestrian overpasses and improved beach access.

The trench is just one of several proposals in an effort to save the tracks that run along the eroding California coastline. Officials think the idea is unique, but are concerned about erosion and a rising sea level. Beach access also could be a problem.

Meanwhile, landslide incidents on the bluffs are becoming more frequent so a solution to the track needs to happen soon.

Four other alternatives feature routes about a mile inland that have 270-ft-deep tunnels. A fifth has a trenched route that would follow Camino Del Mar underneath the pavement.

The Coastal Commission says the bluff trench is a direct conflict with “many Coastal Act policies.”

Building tunnels further inland would be an expensive option. Officials say those projects could cost billions of dollars and would take years to execute. The coastal trench solution would be about $400 million and features a quicker turnaround.