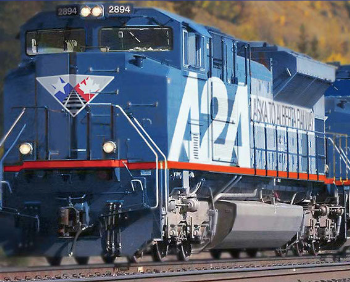 The agreement puts forth in motion a massive 1,500-mile project ultimately connecting Alaska to the Lower 48.
Alaska To Alberta Railway

The Alaska Railroad Corporation Board of Directors approved the move on June 27.

Under the terms, the two railroad companies will cooperate in applying to the Alaska Department of Natural Resources for a right-of-way guaranteed under state law for a rail connection to Canada. In addition, the two firms will develop a joint operating plan which will specify not only the new track needed to connect Alaska’s rail to Canada, but will also identify work needed to upgrade existing rail facilities, bridges, and track on the Alaska Railroad’s 512-mile mainline which runs from Seward to North Pole, Alaska.

The entire project is expected to cost approximately $13 billion U.S. ($17 billion Canadian). Full construction will begin after a right-of-way is approved by state authorities, a Presidential border crossing permit is received, environmental reviews are conducted by the U.S. and Canada, and two national agencies – the Surface Transportation Board (STB) in the U.S. and the Canadian Transportation Agency (CTA) – give their approvals. First Nations, Indigenous groups and Alaska Native entities, whose traditional lands are crossed by the route, are being consulted during this process. These entities have been invited to participate in the economic benefits of the project. A full project description for the rail link in the U.S. and Canada is expected to be completed this year.

“We are pleased to reach this milestone with the Alaska Railroad,” said Sean McCoshen, CEO and co-founder of A2A Rail. “It will help assure global investors that obtaining a right-of-way in Alaska is achievable, and sets up major cooperation in permitting, operations, and marketing with the Alaska Railroad. We expect this project to generate significant economic activity in Alaska and Canada.”

“A rail connection between Alaska and Canada and the rest of the United States is a project that has been talked and dreamed about for close to a century,” said ARRC President and CEO Bill O’Leary. “Completing that connection has amazing potential for Alaska and this agreement between the Alaska Railroad and A2A Rail is an important first step to get the project underway.”

For more news, go to www.rtands.com.