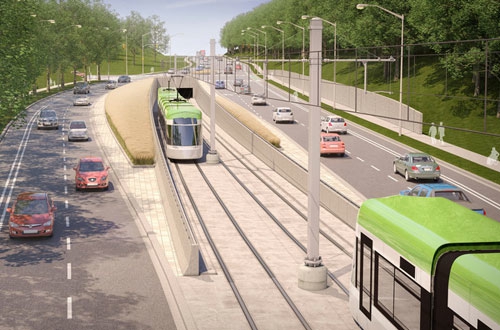 The CBC is reporting that Canadian Prime Minister Justin Trudeau today announced a major funding initiative for the country’s transit systems. He announced this virtually, and was accompanied by Canadian federal environment and infrastructure ministers, and Tamara Vrooman, the chair of the Canadian Infrastructure Bank.

Trudeau said that C$14 billion will be invested in public transportation projects throughout the nation over the next eight years. The funding will be divided in two parts. First, short-term funding of C$5.9 billion will be spent on specific projects beginning in 2021. Second, beginning in 2026, C$3 billion per year will be allocated to a permanent transit fund that will be available to entities throughout the country after consulting with Indigenous communities, provinces, territories and municipalities.

The Prime Minister pointed out that public transit systems are in need of permanent funding for new build and expansion. Trudeau added “We need efficient and modern public transit systems that make our communities more connected. While these investments are good for the economy and crucial to our recovery from this global crisis, they’re also helping us achieve our climate goals.”

For more information on this story, check the complete CBC report.