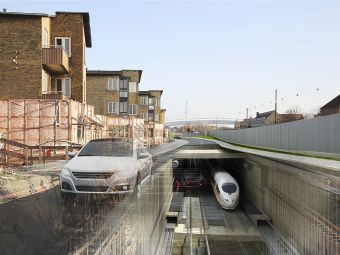 Banedanmark is building Denmark’s fastest railway, where trains will reach speeds of 250 kilometers per hour on the 60-kilometer dual-track electriﬁed railway.
Bentley Systems

As part of its vision to create the railway of the future, Banedanmark is building Denmark's first high-speed railway between Copenhagen and Ringsted.

The 60-kilometer new line crosses 88 bridges and passes through four tunnels to connect 10 municipalities, with a new station at Køge Nord and new platforms at Ny Ellebjerg Station for regional and long-distance connections.

A state-owned enterprise under the Ministry of Transport and Building, Banedanmark provides 24/7 train service throughout Denmark, with 3,000 trains running on 3,102 kilometers of railway each day. The network transports more than 197 million passengers and 8 million tons of freight annually. In 2010, the Danish parliament authorized the development of a dual-track electrified high-speed railway from Copenhagen to Ringsted via Køge. Banedanmark was tasked with building the railway, which will handle passenger trains traveling at 250 kilometers per hour.

Scheduled for completion in 2018, the new line is one of Denmark’s largest rail projects in recent years. In the 60-kilometer corridor, the railway required four tunnels totaling 1,750 meters as well as 88 bridges. The track passes through 10 municipalities, where Banedanmark had to expropriate 717 acres of land with approximately 200 buildings, and relocate more than 600 utilities. The earthworks alone were massive, moving an estimated 3.3 million cubic meters of dug earth.

Given the scope, Banedanmark was challenged to ensure the buildability of the line. The project was divided into 20 tender packages, which made it imperative to have traceable engineering content and collaborative data sharing. Interface coordination between contracts would depend upon the handover of necessary data from one contract to another. These and other design processes needed to be resolved in innovative ways for the project to proceed on schedule and within budget.

Banedanmark’s goal was to use best-in-class purchasing practices, economies of scale and state-of-the-art technology to deliver the $1.5 billion design-build project within budget by 2018. Using Bentley Rail Track and other Bentley Systems civil design applications enabled Banedanmark to provide contractors with intelligent 3D models throughout the project’s lifecycle, resulting in tender packages that were 9.3% lower than estimated.

ProjectWise®, Bentley’s design coordination and content management workhorse, served as the collaboration platform for contractors working on different aspects of the project. The platform allowed relevant CAD data to be shared with various parties at pre-tender, post-tender, and as-built stages while maintaining a connected data environment (CDE). With ProjectWise, team members knew that they were always using up-to-date data.

Early in the project, Banedanmark issued a CAD manual that defined standards and procedures for producing documentation, structuring CAD files, creating 3D models, exchanging files and preparing deliverables. Using intelligent 3D models as the basis for design and construction ensured that all documentation had the information required for quality assurance and accountability. ProjectWise design check routines automatically verified that models conformed to standards at each stage of the project.

Standardizing on Bentley’s civil design software ensured powerful interoperability among applications. Within the CDE, data from project team members, contractors and vendors could easily be read, referenced and shared among disciplines. The applications provided consistency and clash detection, as well as performed quality checks on CAD data. Data could also be exchanged between non-Bentley applications, such as ArcGIS, Banedanmark’s GIS platform.

To confirm that bidders fully understood their contract requirements, Banedanmark requested 3D models from all disciplines. MicroStation® was used to collect the models, perform quality control and produce evaluation reports. Instead of using 2D drawings in meetings, i-models were used to collect and distribute 3D models for discussion and troubleshooting. MicroStation made it possible to get an overview of the project and optimize the design. Eliminating errors and preventing conflicts helped to reduce costs and avoid construction delays.

Bentley software was instrumental in resolving situations that could have caused significant delays and escalated costs. When civil works had to be approved with incomplete information regarding signaling and overhead lines, the project team used Bentley Rail Track to create a 3D model of the minimum infrastructure gauge (MIG). Using MicroStation together with Navigator for clash detection, the team produced reports that indicated conformance with MIG requirements for ensuring safe passage of the trains. This provided the basis for securing timely approvals from the Independent Safety Assessor and Notified Body.

In the case of discrepancies between design data and the work performed on-site, Banedanmark used PowerCivil for Denmark to document the situations and close contractor claims. Questions about quantities were addressed by surveying the work, generating point-cloud data, comparing design against work quantities, and documenting the differences. PowerCivil also provided the tools necessary to model existing and relocated utilities when the owners had insufficient information about their locations, reducing the risk of damage during construction.

To gain support for the project from regulators, stakeholders and the public, Banedanmark created photorealistic animations using MicroStation, Descartes and Bentley Pointools. The visualizations revealed how the railway would impact the local environment, and helped the stakeholders to understand and accept the project. MicroStation’s animation capabilities also generated visuals that were essential for placing signs and signals, and testing visibility for drivers.

The process for generating and rendering animations was time-consuming, so the team developed a workaround. By converting a model into a point cloud, combining it with the original point cloud and creating an animation from the resulting point cloud, the team was able to work 10 times faster than by traditional methods. Generating animations in 3D and viewing them with 3D glasses made them more realistic.

Banedanmark’s well-coordinated design process helped the project stay on schedule and achieve overall budget savings of 10% to 15%. The bold move to require the use of intelligent 3D models resulted in contract tenders that were 9.3% lower than expected. Contractors reported that the 3D models lent a design clarity to the project that reduced risk. The models provided solid data for preparing realistic budgets and accurate quantity estimates. The right software in the right hands helped to make possible the buildable, traceable project that Banedanmark envisioned.

The successful use of Bentley’s state-of-the-art technology on the Copenhagen-Ringsted project resulted in the introduction of a new initiative, the “Digital Railway of the Future.” Running from 2015-2017, the initiative aimed to implement BIM methods throughout the lifecycle of ongoing construction projects. The program called for using the same methodologies that were proven on the new line, as well as investigating how to use 3D models and intelligent data in asset management.

The project will be the first stage of Denmark’s “One Hour Target,” a plan to shorten travel time between major cities to one hour or less. Upon completion, the high-speed rail will reduce travel time between Copenhagen and its suburbs by 14-24 minutes per trip. The new line will address overcrowding on existing lines by providing more departures, shorter travel times and fewer delays. As part of the Trans-European Network, it will also link Scandinavia to the rest of Europe and expand freight traffic along this corridor.

“Bentley’s commitment to providing the tools necessary to support the whole lifecycle of assets and interoperability with other design and construction software means that Banedanmark’s CAD data is usable, well coordinated and well documented,” said Gita Mohshizadeh, CAD Manager, Banedanmark.