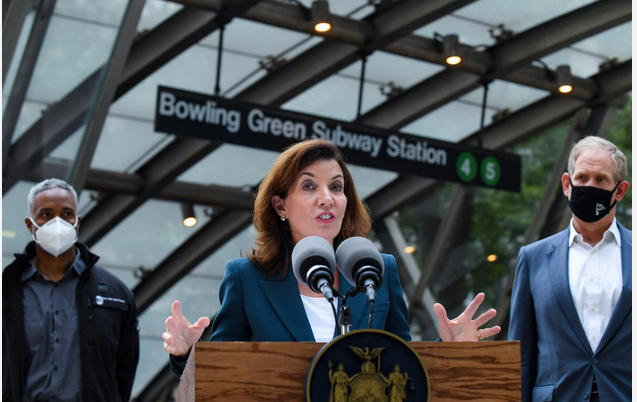 Gov. Kathy Hochul reacted to her first major event after having been in office for a week.

A technical problem at Con Ed led to a significant power outage that stopped half of the New York subway system, as well as communication between the command center and trains. Below is a transcript of the governor’s statement this morning. For audio, video, and still photographs, please visit the MTA site.

“Good morning. I’m Governor Kathy Hochul. I thank you for joining us on this beautiful Monday morning. I’m joined by Janno Lieber, the MTA acting chair and CEO, and Demetrius Crichlow, the senior vice president in the department of subways. Last night, one half of the New York subway system experienced an unprecedented system breakdown. Approximately 8:25 p.m., Con Ed reported losing a feeder for a short period of time that resulted in a voltage dip across New York City. At about the same time, two power plants and generators went offline. It was a momentary outage that did go to the backup system. When it tried to go back to normal, there was a surge, an unprecedented surge that resulted in the subway losing signalization and communication ability and it lost that between its command center and the trains throughout the system.

“The trains that were affected were the numbers lines 1 through 7, as well as the L train. Eighty-three trains were affected but what was most concerning was the five trains that had been stuck between stations. This ended up leading to evacuations in the tunnels and two of those evacuations were orderly and directed by the emergency personnel. In two other cases, the experience was what was known as self-evacuation, where riders decided to leave on their own. We never, ever want riders to do that. It is dangerous and it caused a delay in the restoration of power. The tracks are dangerous and the last train was re-platformed.

“What we experienced was a lot of anxiety for the citizens of the city who happened to be on the trains, and on the five trains in particular that were between the stations over 550 people were affected. Again, this is a scary situation, something we don’t want New Yorkers to ever have to experience again. And again, I say this was unprecedented. The confluence of events that led to this has never happened before to our knowledge. So we did have a rolling restoration. It would have happened earlier, and this happened at 1:30 a.m. It could have happened around midnight, except we had to make sure, working closely with the FDNY, that because of the self-evacuation that they had to go examine all the tracks to make sure that there were no people on them. That was a very dangerous situation. So that did delay the restoration of power. It could have been restored by midnight. But by 1:30, all trains are restored in the morning, commute operations are going normally.

“Let me be very clear. Last night was unacceptable. If you’re one of those riders or people relying on safe transport, the system failed you. The MTA is the lifeblood of the city, and a disruption of this magnitude can be catastrophic. And thank God, when you think about the time that this happened. It was a time of low ridership. It was on a weekend night, late at night. And I can only imagine how devastating this would have been for thousands of New Yorkers had this occurred during a morning commute like this morning. So I’m immediately directing a review to find out the root cause of the service issues last night. We need to know why the system broke down and why there’s a breakdown of communications between the rail center, the rail control center and the trains. I would also be clear that we’ve had no indication of any malicious actions that would, that would have created the situation, and that’s why I want to find out exactly what happened to prevent it from happening again.

“We are in regular communications with City Hall throughout this and the Office of Emergency Management, they are participating directly. So it was a collaborative effort between the state and the city, the MTA. And I do want to thank all the transit workers, particularly the conductors who had the weight of responsibility on their shoulders to go to all through the trains, sometimes 10 in number, to let people know verbally what were experiencing. Again, there was no communication other than what the conductor could say on the PA system or verbally went to the trains because the overall system was not functioning.

“So I also want to think all the transit workers, the NYPD was fabulous. We enjoyed working with them and their professionalism. FDNY was right there on the scene doing their work, and all the first responders who worked tirelessly through the night to rescue people who had been stranded, make sure that it was safe, and ultimately the restoration of power. So I want to commend the work of all these New Yorkers and the work that’s going in every single day at the MTA to make sure that everything is working right.

“Again, this was triggered by an incident at 8:25, when Con Ed reported losing a feeder. Now I want to thank you very much, and I want to thank the leadership of these individuals. They worked tirelessly through the night. I trust their professionalism and I trust their ability to get to the bottom of this and give me a full report once they’ve had an opportunity to examine the circumstances that led to this. Once again, an unprecedented system breakdown in half of the New York City subway system.”