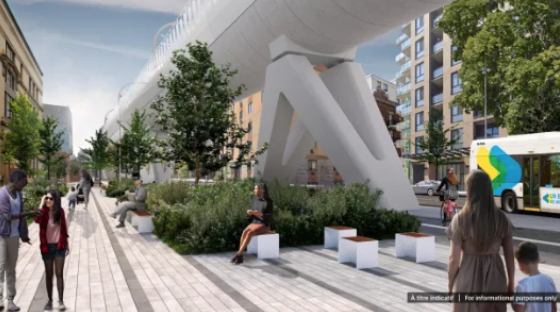 The people of Montreal were against the idea of an elevated structure running through the downtown area.

Montreal and Quebec are taking over the REM de l’Est light-rail project, putting an end to a controversial design in downtown Montreal that was ridiculed by the public.

The elevated line that was proposed will now be abandoned completely. As an alternative, the eastern section of the REM will only be developed on sections that already have been approved by the public.

“Since Day 1, our goal has been to achieve the best possible public transit project in the eastern part of the Greater Montreal area,” said Quebec Premier Francois Legault said in a statement. “The project has evolved over time and it must continue to evolve. We are making the necessary adjustments to fulfill our commitment to build the REM de l’est.”

The REM de l’Est will be linked to the metro.

In March, prime contractor CDPQ Infra unveiled new designs for the project amid the public concern, and claimed they addressed 80% of the concerns raised in a report authored by an expert advisory committee. The advisory committee report was critical of the project’s original design, stating that the large concrete pillars to support the elevated track could end up dividing neighborhoods.