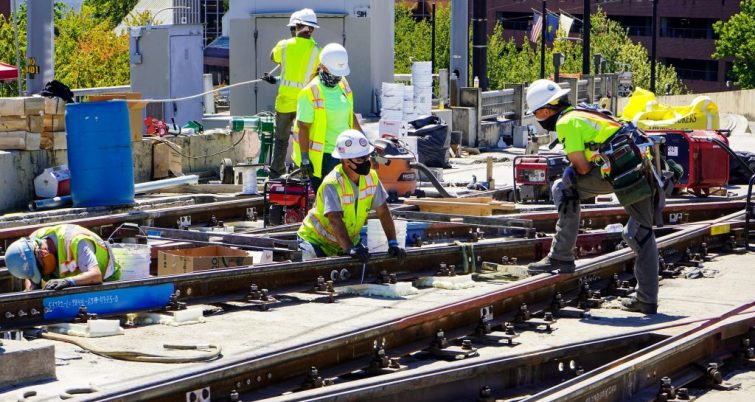 TriMet’s major Steel Bridge MAX Improvements project is on track with two weeks remaining on its schedule. The revitalization effort—more ambitious and complex than past improvements projects—is a huge undertaking, requiring crews to rebuild and modernize a part of the light rail system that every MAX line crosses. The project is set to last through Saturday, Aug. 29, with the bridge re-opening to MAX, bus and automobile traffic on Sunday, Aug. 30.

All MAX lines have been disrupted due to the project. Shuttle buses continue to take riders across the Willamette River. On the final day of the project, Saturday, Aug. 29, the disruption on the east side expands. This will allow TriMet to run test trains through the rebuilt part of the system near and on the bridge itself to ensure new track, switch and signal equipment work as intended.

A lot of the old rail across the bridge has been pulled out entirely, but we still have a little left to do. By the start of next week, all of the switches and rail will have been removed, and approximately half of the bridge’s rail will have been replaced. All of the work on the rail and switches in this area will reduce the pounding trains take going through there, helping with the maintenance of the vehicles and creating a smoother ride for those on board.

At 108 years old, and one of the busiest crossings on the Willamette River, the Steel Bridge has seen a lot of dynamic movement over the years that makes upgrades like these necessary.

Our signals system is another crucial component that’s being upgraded during our four-week project, which will improve efficiency and minimize delays. As of now, all the new equipment has been installed. This includes three signal cases on the bridge itself and one on the east side approach, along with all their components. The signals’ connections to the rails has not been completed; however, that work is set to take place next week.

Since the start of the project, crews have been working around the clock to perform all the upgrades and improvements that need to be made. Daily tallies vary, but on the busiest day of construction our employees counted as many as 120 people working on the bridge, with the daily average being between 65 and 70 workers. All told, the project is expected to help support around 450 jobs.