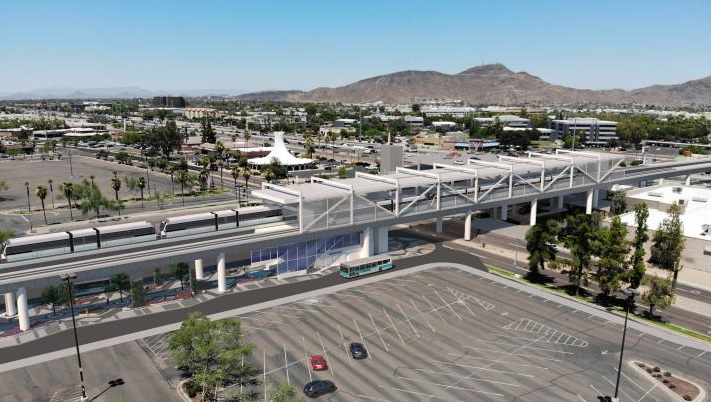 Construction on a new 1.6-mile extension of light rail, which will include the system’s first elevated station, is now underway. Crews have begun utility relocation, the first phase of construction, on the north side of Dunlap Avenue just west of the existing 19th Avenue/Dunlap station.

In addition to a new transit center for light rail and bus service at Metrocenter, the extension also includes a rail-only bridge over the I-17 and two new stations. The community also will enjoy seven public art installations along the extension and updated landscaping, including more than 200 new trees.

“Light rail is an important component of our transportation infrastructure as it connects residents across the Valley and attracts new businesses and employment opportunities. Residents and businesses in the Metrocenter area are ready and excited for construction on the Northwest Extension Phase II to begin as the area is primed for quality development driven in part by light rail,” said Councilwoman Thelda Williams, whose district includes the Metrocenter area and is chair of the Transportation, Infrastructure and Innovation Subcommittee.

The extension recently received a $50 million allocation of grant funding from the Federal Transit Administration as part of the Capital Investment Grants Program. In addition to this project, Valley Metro currently has two other projects now under construction: South Central Extension/Downtown Hub and Tempe Streetcar.

“With this extension of light rail, we’re building a north/south light rail line and new connections for our riders to offer greater flexibility and opportunity for travel,” said Scott Smith, Valley Metro CEO. “From the northwest to downtown and soon, south central Phoenix, we’re improving regional access for residents and visitors alike.”