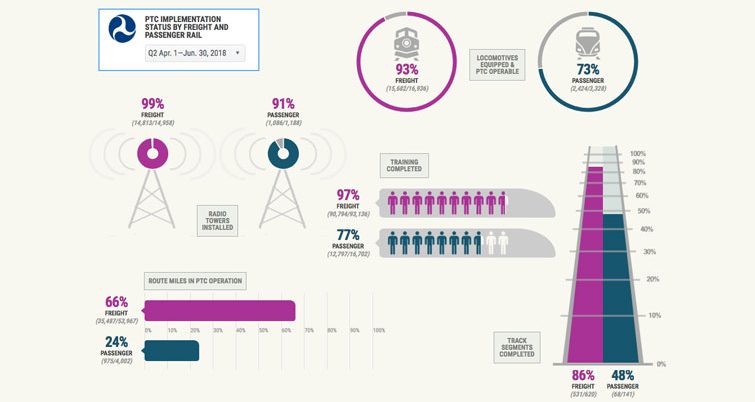 In addition, FRA explains that 14 railroads have initiated sufficient revenue service demonstration (RSD) or met substitute criteria, which is one of the six statutory criteria needed to qualify for an alternative schedule of Dec. 31, 2020. PTC systems are in RSD or operation on approximately 37,705 route miles (65 percent) of the nearly 58,000 route miles that are subject to the statutory mandate.

FRA says this marks a significant improvement from December 2016, where freight railroads had PTC active on just 16 percent of required tracks, while passenger railroads were at 24 percent.

“The railroads have achieved some significant improvements over the past year implementing this safety technology,” said FRA Administrator Ronald L. Batory. “While we are seeing progress among a majority of railroads, we want to see everyone meet their requirements.”

The number of “at-risk” railroads dropped 25 percent, from 12 to 9, based on Q2 2018 data. FRA currently considers any railroad that installed less than 90 percent of its PTC system hardware as of June 30, 2018, to be at risk, as installation of all PTC system hardware is only an initial phase of implementing a PTC system and only one of the six statutory criteria required to qualify for an alternative schedule.

FRA has held quarterly meetings with those railroads classified as “at-risk” and recently held the final of three symposia focused on PTC.