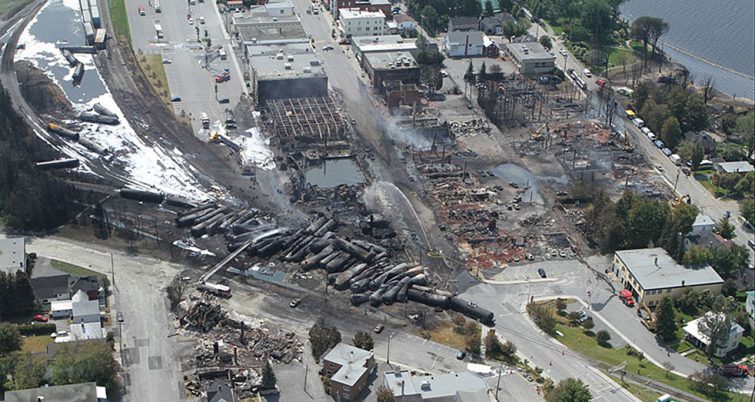 The derailment site following the accident.
Transportation Safety Board of Canada

On the fifth anniversary of one of the most horrific rail accidents in modern times, Canadian officials issued a series of statements with a common thread: We remember, we will learn and we will do better.

“The disaster that occurred on July 6, 2013, will remain forever etched in our collective memory. The hearts of all Canadians go out to the residents of the region on this particularly difficult day. We continue to remember the 47 people who lost their lives, and our thoughts are with their families and loved ones,” said Canada’s Minister of Transport Marc Garneau.

Kathleen Fox, chair of the Transportation Safety Board of Canada said, “Much has been accomplished in the intervening years, but more remains to be done. For instance, although the ‘legacy’ Class 111 tank cars involved in the Lac-Mégantic accident are no longer permitted to transport crude oil, the phase-in period for newer, more robust cars for the transport of flammable liquids is not yet complete – nor is this required before 2025. The railways, however, have made significant progress in terms of implementing emergency response assistance plans, and they have been conducting route planning and risk assessments whenever large amounts of oil are being moved. In the meantime, the issue of additional physical defenses, which the TSB has called for to help prevent uncontrolled movements, has yet to be sufficiently addressed. Transport Canada has also strengthened its oversight regime for the railway industry by conducting more frequent and comprehensive audits of railways’ safety management systems, and by striving to ensure that each railway has completed its required corrective action.”

“Rail safety and the safe transportation of dangerous goods in Canada remain top priorities for the government of Canada, and we will continue to take steps to prevent another tragedy like this from ever happening again,” said Prime Minister Justin Trudeau.

In May, the government of Canada committed to funding 60 percent of a 12.8-km (7.9-mile) route will allow trains to bypass the town. Central Maine & Quebec Railway (CMQ) will own and operate the new infrastructure.

“This bypass is much more than a railway infrastructure project; it is a way to support the rebuilding of the community by ensuring the well‑being of its residents and enabling them to move forward,” said Minister Garneau.

“The project will support recovery and reconstruction efforts, and help heal the wounds of a community that has been through so much. We hope that by permanently removing the rail line from Lac-Mégantic’s downtown, we can create more peace of mind and support the healing process, as well as strengthen the community’s economy,” said Prime Minister Trudeau.