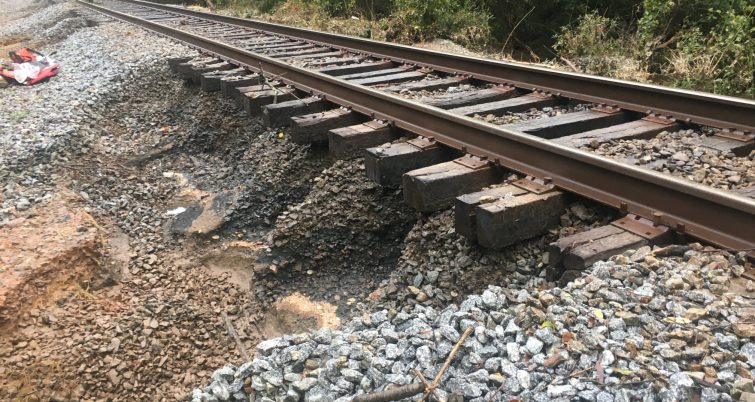 The National Transportation Safety Board (NTSB) recently issued a safety recommendation to the American Short Line and Regional Railroad Association about the importance of maintaining dynamic weather alert criteria in railroad operations.

NTSB Safety Recommendation R-20-27 was issued in response to a CSX Transportation train derailment that resulted in a hazardous materials release, and ASLRRA asked its members to review the following information provided by NTSB on dynamic weather alerts and how its use could prevent weather-related derailments.

The NTSB recently issued a report about a derailment in Draffin, Ky. caused by heavy rainfall where the weather alert criteria did not account for the risks due to excessive rainfall before the accident.

On Feb. 13, 2020, a high hazard flammable train carrying denatured ethanol derailed on a CSX
Transportation railroad track that runs between a hillside and the Russell Fork River near Draffin.

The NTSB determined that the derailment occurred because of a mudslide that obstructed the track
following excessive rain accumulation over several weeks before the accident. Furthermore, the NTSB found that the system providing the weather alerts to the railroad did not consider the above-normal rainfall accumulated over several weeks, and elevated temperatures (leading to rainfall instead of snow) in the month before the derailment.

This was not an isolated incident. In the past 40 years, the NTSB has investigated five other
derailments where adverse weather conditions, particularly rainfall, affected railroads’ infrastructure
and created unsafe operating conditions. These accidents are discussed in the report associated with
the Draffin derailment. CSX Transportation Derailment with Hazardous Materials Release and Fire,
Draffin, Kentucky, February 13, 2020. (NTSB/RIR-22/13) and can be found on the NTSB’s investigation webpage.

The NTSB’s investigation found that the weather alert criteria used by most Class I railroads and some major short line railroads [was] static criteria, meaning they only considered the current weather and near-term forecast; they did not consider unusual weather conditions in the days preceding the alert. For example, CSX’s static criterion for a flash flood alert was at least three inches of rain over a period of three hours or less. The criterion did not consider the effects of accumulated rainfall during the previous two weeks.

Other industries have used dynamic criteria that consider varied and changing initial conditions for
weather alerts. Dynamic criteria account for unusual increases in precipitation or other changes in
weather and climate and the alerting criteria levels may change depending on the environment and
how preceding weather events have affected it. For example, dynamic weather alert crtiteria may take into account ground saturation from previous rainfalls when determining the effect that three inches of rain falling in an hour would have on a particular geographic area.