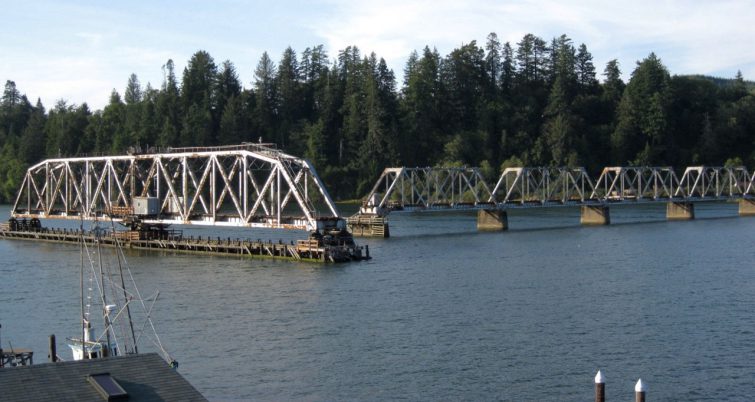 Coos Bay Rail Line swing bridge across the Umpqua River in Reedsport, Ore. The span was built in 1914 by the American Bridge Company.
Wikipedia/Doug Kerr

Yesterday was a good day for railroaders and contractors with their eyes on the U.S. Department of Transportation’s Better Utilizing Investments to Leverage Development (BUILD) program.  Programs in five states received word that they would receive BUILD funding in 2019.

The big winner was the state of Oregon. First, the Oregon International Port of Coos Bay was awarded a $20 million federal grant to rehabilitate 15 bridges along its Coos Bay Rail Line. In addition, the Port of Morrow, located on the Columbia River near Boardman, Ore., learned it will get a $19 million grant to build rail infrastructure to connect a Union Pacific mainline to four separate barge terminals within the port’s industrial park.

In Missouri, U.S. Senator Roy Blunt and U.S. Representative Jason Smith announced that the Southeast Missouri Regional Port Authority (SEMO) will receive a $19.8 million grant to finish a loop track at the port it operates on the Mississippi River near near Cape Girardeau. The SEMO Port is served by both the Union Pacific and BNSF.

“The Semo Port plays a critical role in in our state’s economy, especially when it comes to moving our ag products to market,” Blunt said. “This project will help ensure the Southeast Missouri Regional Port Authority is able to continue building upon the steady growth they’ve achieved over the years.”

In Illinois, the city of Springfield will get a $22 million BUILD grant for rail improvements, including drainage, grading and the construction of two bridges in the capitol city.

Back east, Southeastern Pennsylvania Transportation Authority (SEPTA) received news it would get a $15 million grant to fund platform widening, elevator installation and other projects at Philadelphia’s 30th Street Station.

Vermont will receive a $20 million BUILD grant to help improve or replace 31 bridges along the Vermont Railway, according to a statement released by U.S. Sen. Patrick Leahy (D-Vt.) The plan is to increase the weight ratings for rail bridges to support the industry standard for freight car loads of 286,000 pounds. At present, most rail lines in Vermont can support weight loads of only 263,000 pounds.

USDOT announced in April that the BUILD program, which would have some $1.5 billion available in discretionary grant funding, would replace the Transportation Investment Generating Economic Recovery (TIGER) grant program. Among the requirements of the BUILD program are that at least 30 percent of funds must be awarded to projects located in rural areas, that a single state can be awarded no more than $150 million, and that no single project be awarded more than $25 million.