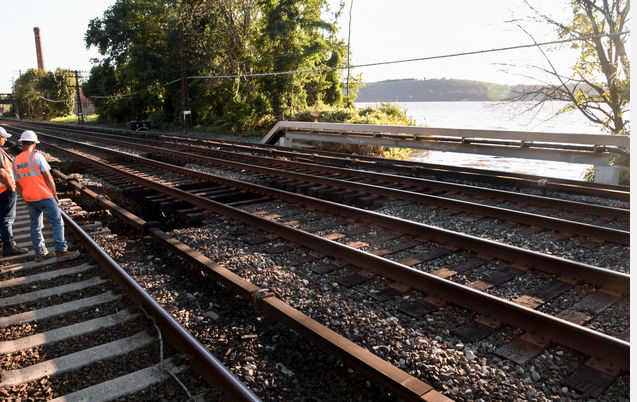 MTA has pieced together a schedule of enhanced weekend service on Metro-North.
Metro-North

Following up on yesterday's story about heavy rain and flooding in the northeast and New York City, MTA has announced some service restorations on Metro-North.

MTA Metro-North Railroad today announced that following the unprecedented rainfall associated with the remnants of Hurricane Ida, it anticipates restoring service on the full length of the New Haven Line and on the Harlem Line as far as Southeast, N.Y. Trains will operate on an enhanced weekend schedule beginning at approximately 5:00 a.m. North End Access at Grand Central Terminal is expected to reopen at 6:30 a.m.

Metro-North crews worked early Thursday morning and throughout the day to clear flooding and mudslide conditions, remove downed trees and debris across all three of its East-of-Hudson lines. Crews were able to clear more than 10 inches of water at two critical substations that allow Metro-North to run electric service in time for the morning. On the Harlem Line, crews eliminated high-water conditions along the line, in addition to clearing debris from a collapsed wall at the Williams Bridge station in the Bronx.

On the New Haven Line, high water and mudslide conditions were most prevalent between Rye and Norwalk. Crews were able to clear debris, water and mud from tracks, and inspect and test switches, signals and power.

“Our crews have made extraordinary progress over the last 24 hours in extremely difficult conditions following unprecedented rainfall throughout the region,” said Catherine Rinaldi, President of MTA Metro-North Railroad. “Thanks to their work through the night and day we are able to restore train service on the Harlem and New Haven lines, and they continue to work tirelessly so we can restore full service as soon as possible. I cannot thank our crew members enough for the heroic work they have been doing and will continue to do.”

Service on the Hudson Line, where damage was the most severe, remains suspended. Crews continue to work expeditiously to clear mudslide and track washout conditions.

Crews will also continue clean up efforts on the New Canaan and Danbury branches, where service is not expected to be back on Friday morning. Substitute bus service on the Waterbury Branch associated with ongoing infrastructure work will resume.

Metro-North will cross-honor tickets between the Hudson and Harlem Lines and waiving the surcharge for on-board fares. Metro-North also expects to run shuttle service between Grand Central and Yankee Stadium for tomorrow night’s 7:05 p.m. Game.

On its West-of-Hudson lines, crews were able to remove downed trees, and expect the Port Jervis Line to run a normal weekday schedule. Service on the Pascack Valley Line will remain suspended.

Metro-North reminds customers conditions can change and customers should check MTA.info or use the MYmta.app, Metro-North’s TrainTime app prior to traveling.

MTA prepared a photo album of images of storm damage to its lines and surrounding areas.