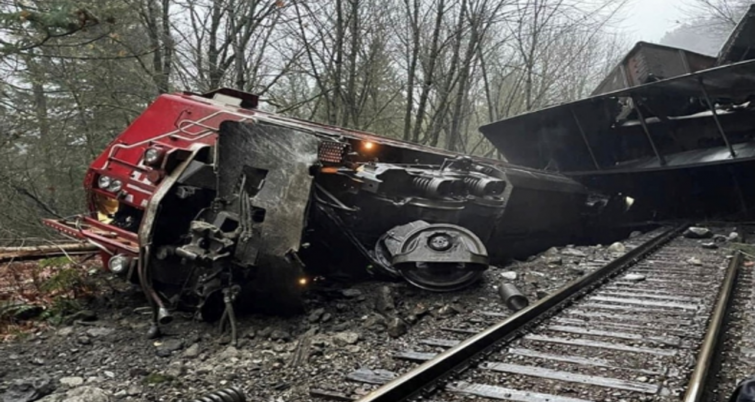 A Canadian National train derailed in British Columbia on Nov. 14.

The supply chain has been choked for months, and a long drink of water is the last thing it needs.

Railroad tracks at the Port of Vancouver have been hit with heavy rains and mudslides, marking the second time in less than five months both of Canada’s rail carriers have had tracks damaged in British Columbia. Back in July the cause was wildfires. Both Canadian Pacific and Canadian National are dealing with track washouts.

According to Canadian National, crews were waiting for conditions to stabilize before beginning work. The Class 1 was monitoring the area and would make the call when it was safe to do so. The track closures are near Cheam View and Hope, which are about 80 miles east of Vancouver.

Mudslides and flash flooding in British Columbia also caused a train derailment on Nov. 14. A Canadian National train was off the tracks in the Fraser River Valley. No injuries were reported and the two derailed railcars were not carrying anything hazardous.

The accident happened on Canadian Pacific property, and the Class 1 sent crews to the scene immediately.