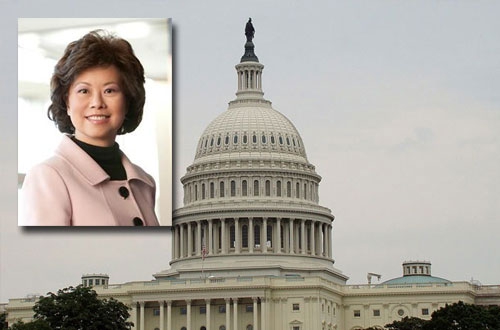 U.S. Secretary of Transportation Elaine Chao says the administration's forthcoming infrastructure proposal will cover more than infrastructure and reiterated the belief that regulatory red tape, not funding, is responsible for holding up projects.

Sec. Chao spoke during the U.S. Department of Transportation 50th Anniversary Open House where she said infrastructure “has been the backbone of our country’s economy for the past 50 years, strengthening competitiveness and creating unprecedented mobility and opportunity.”

She also noted the many changes the infrastructure sector has undergone and especially technology’s role in creating a new type of transport based on digital rather than human command and control.

“The president has consistently emphasized that one of his top priorities is modernizing our country’s outdated infrastructure. While technology has advanced rapidly, our transportation system has not kept pace. His infrastructure initiative — which will be announced later this year– will include a strategic, targeted program of investment valued at $1 trillion over 10 years. The proposal will cover more than transportation infrastructure– it will include energy, water and potentially broadband and veterans hospitals, as well,” said Sec. Chao.

She continued, “Another key issue, of course, is how to pay for infrastructure without saddling future generations with massive debt. The President’s plan hopes to unleash the potential for private investment in infrastructure by incentivizing public-private partnerships. This is one additional way to address the resource needs of transportation systems.

“Investors say there is ample capital available, waiting to invest in infrastructure projects. So the problem is not money. It’s the delays caused by government permitting processes that hold up projects for years, even decades, making them risky investments. That’s why a critical part of the President’s infrastructure plan will include common-sense regulatory, administrative, organizational and policy changes that will encourage investment and speed project delivery.”

She concluded her speech with a call to work together in order to “incentivize the future, eliminate unnecessary barriers to change, and usher in an unprecedented new era of safety, mobility and prosperity for our country and its residents.”