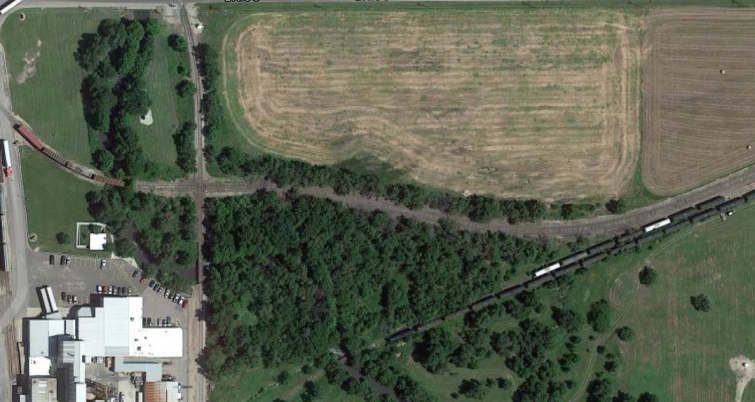 This section of the Cow Creek is the trouble spot where three railroad bridges are located 750 ft from each other.

Cow Creek in the city of Hutchinson, Kan., is in need of being “milked”, but railroad companies need to cooperate first.

The creek is susceptible of flooding, and in order to ease the tension a number of railroad bridges need to be either rebuilt or removed. Officials have reached out to Union Pacific, BNSF, K&O Railroad and V&S Railway, but so far only the short line companies appear willing to help in the short term. The bridge owned by Union Pacific is the busiest by far, handling several trains a day. The other three spans are within 750 ft of each other, and two are inactive.

The creek channel between D and G avenues is the trouble spot, and the city acquired the final section of land to help put the project in motion. However, the real bottleneck is outside of the construction zone, where three bridges are essentially not letting the water out.

The city created 30 hydraulic modeling scenarios and how they would impact flows with various flood levels ranging from a 10-year event to a 500-year event. The area south of G Avenue is the trouble spot. Furthermore, improvements to the flow up north could make the whole situation worse. A 1% increase in water flow on the north end without making improvements on the southern end would increase the water depth by a half foot within the flood plain. Fixing the flow to the south by 1% if nothing was done elsewhere could produce a 2 ft drop in water.

The project could be cut into two phases so utility relocations could be executed while the city awaits action from the major railroad companies.