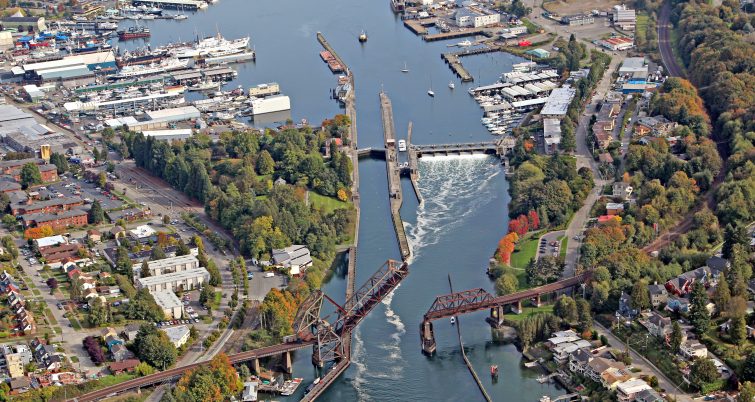 Aerial view of Ballard and the Hiram Chittendale Locks.
BNSF

BNSF Railway has been exploring options to address issues with the counterweight system on our rail bridge that crosses Salmon Bay. Over the years, BNSF has invested millions to extend the operational life of their century-old Salmon Bay Rail Bridge. Upgrades and maintenance have kept the bridge structurally safe and sound. However, frequent openings to accommodate marine traffic have taken a toll on the counterweight system. Diagnostics indicate that this system—which allows the bridge to open and close—is starting to fail.

BNSF originally looked at replacing the entire structure, but following input from the maritime industry, community and other stakeholders, they have made the decision to alter their course. Based on expert analysis and review, BNSF has developed a heavy maintenance strategy to replace both the trunnion bearings that allow the counterweight to rotate and the steel and concrete that account for most of the counterweight. This approach will keep the majority of the Salmon Bay Rail Bridge—which is in good condition—intact, and safely address maintenance needs with the lowest environmental and community impact. This means the bridge will look substantially similar to what it does today.

The project is currently in the preliminary design phase, and BNSF anticipates submitting permit applications to the appropriate agencies in the near future. They will continue to provide updates about the project through their distribution list and website: bnsfnorthwest.com/salmonbayrailbridge.