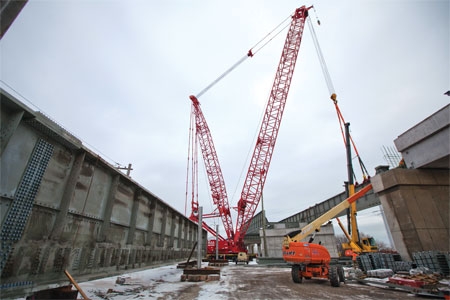 In it's 11th year, the CREATE program continues its capacity and safety enhancements to secure Chicago's place in a strong national rail network.

In it’s 11th year, the CREATE program continues its capacity and safety enhancements to secure Chicago’s place in a strong national rail network.

It’s hard to believe the Chicago Region Environmental and Transportation Efficiency (CREATE) Program, a partnership between the United States Department of Transportation (USDOT), the state of Illinois, city of Chicago, Metra (the region’s suburban passenger rail provider), Amtrak and the nation’s freight railroads, is more than a decade old. In that time, 20 projects have been completed, nine are under construction and 19 are in the design phase with four of those design projects expected to enter construction later in 2014.

The program is vital to Chicago’s survival as a national and North American rail hub. Early terminal model results, prior to the program’s commencement, pointed to complete gridlock along the Chicago system by 2015 if nothing was done. But something was done and CREATE set out to improve capacity, relieve congestion and enhance safety throughout the system, which is already seeing significant measurable results from the completed projects.

“The feedback from rail customers around the country impacted by CREATE has been positive,” said Bill Thompson, CREATE program manager with the Association of American Railroads. “Regionally, the railroads have seen roughly a 30-percent reduction in manifest cross town transit time. The Chicago terminal is ringed by Automatic Equipment Identification (AEI) readers. Each rail car in North America has an AEI tag on it. The railroads are able to receive the date and time a car enters the terminal and departs the terminal. In 2003, manifest trains were operating through the terminal in 43 hours. In 2012, trains were operating through the terminal in 32 hours.”

Approximately 42 percent of the 70 projects associated with CREATE are complete or under construction. The program has spent $500 million of the $1.2 billion available and currently estimates the full build out will require an additional $2.5 billion for remaining design and construction.

“The progress of CREATE is often effected by environmental studies and funding constraints, but with regards to funded freight projects, we are finishing all the railroad projects on the Beltway Corridor followed by the Western Avenue Corridor. Some of this is controlled by environmental issues and some are driven by completion of design,” said Thompson. “The Western Avenue Corridor sees significant intermodal traffic. As the Western Avenue improvements are being completed, the intermodal product will move through the terminal with greater reliability.”

Thompson also says six of the program’s 12 tower projects are complete. The railroads agreed to upgrade the remaining towers at railroad expense out of their CREATE contribution and progress continues as railroad funding is available and plans finalized.

Thompson says the largest of the CREATE projects, the 75th Street Corridor Improvement Project, a combination of the P2 Flyover, the P3 Flyover, EW2 track upgrade and GS14 71st street grade separation projects, will have its Environmental Impact Statement complete by the end of 2014. One of the program’s most high-profile projects, P1, the Englewood Flyover, is progressing well.

The south Chicago P1 project will relieve congestion for the approximately 150 passenger and freight trains that traverse the area each day with a series of rail-to-rail and rail-to-highway grade separations, including a 2,100-linear-foot flyover bridge to elevate Metra’s Rock Island tracks over Amtrak and freight lines at 63rd and State streets. In July 2012, a contract was awarded to the joint venture of IHC Construction and Illinois

Constructors for the project and approximately 60 percent of the grade separation work is complete.

Extensive bridge construction at 59th Street, 61st Street, 63rd Street, a Norfolk Southern overpass, the Dan Ryan Expressway (I-94), Wentworth Avenue and 67th Street/Marquette Road is required for the track realignment and approaches to the new flyover. Several large cast-in-place retaining walls and precast retaining walls are being constructed in multiple locations throughout the project and have replaced bridges that were removed at 60th and 66th streets.

Another interesting construction practice utilized in the CREATE program has been innovative bridge roll in and out technology, such as that used to roll a truss into place over Torrence Avenue near 130th Street in August 2012 as part of project GS15a. The 394-foot-long, 43-million-pound bridge is believed to be the largest truss bridge ever moved after assembly.

The project general contractor on GS15a, Walsh Construction, used four self-propelled mobile transporters to relocate the fully-assembled bridge from its assembly site to its final position on the new bridge piers a few hundred feet away.

Thompson says a severe winter has slowed progress on the nine CREATE projects under construction, but he expects decks to be constructed in early spring on the P1 and GS25 bridges.

Thompson also provided an update on the following projects:

A program that has been around for as long as CREATE will run into its fair share of challenges and the trials evolve as the project does. What stays constant is the CREATE program partners’ commitment to see the program through to completion.

“Recent challenges include steadily increasing rail business and a tough winter. CREATE exists so that, in the long term, the region and the railroads around Chicago can be more effective dealing with issues that restrain capacity, such as increased business and weather issues,” said Thompson.

“Track time is always a challenge. The railroads operate 24 hours and seven days per week including most holidays. In addition, Metra dominates the Chicago operation during the rush hours or roughly 25 percent of the work day. Because of 2013 holiday traffic, there was little track time available in November and December. This can be frustrating at times for contractors but this is the rail operation in Chicago,” he said.
“All the CREATE partners, CDOT, IDOT and the railroads along with the Federal Highway Administration (FHWA) and the Federal Railroad Administration (FRA) want the program finished, but funding is always a challenge,” explained Thompson. “Fortunately, the CREATE partnership is solid. The partner contributions to the CREATE program are commensurate with benefits received.

“Most public-private partnerships have a cash stream, such as with a toll authority. The responsible agency will borrow against that future funding stream and expand the infrastructure. This is not the case with CREATE. With CREATE the railroads committed millions of dollars to the program and have kept the money available for design and construction. This previously helped cover Phase 1 shortages when one of the agencies ran short of funding,” he said.

Thompson also points out that the CREATE program’s benefit is recognized by officials at the state and federal government.
“Illinois Gov. Pat Quinn has been very supportive of the program and IDOT contributed an additional $210 million to the program bringing IDOT’s contribution to $410 million. Chicago’s Mayor Rahm Emanuel understood the importance of CREATE from the moment he stepped into the mayor’s office and this continues. The U.S. Department of Transportation continues support of CREATE with FRA Administrator Joe Szabo and FHWA Administrator Victor Mendez visiting projects last year. Many other officials including U.S. Rep. Dan Lipinski (D-IL) and U.S. Rep. Lou Barletta (R-PA), both members of the House Committee on Transportation and Infrastructure, visited CREATE. The CREATE partners were awarded $10.4 million in the TIGER IV program. The railroads have budgeted $234 million for CREATE projects. In June, U.S. Rep. Jeff Denham (R-CA), the chairman of the U.S. House Subcommittee on Railroads, Pipelines, and Hazardous Materials, convened a roundtable discussion on rail transportation and included CREATE in the discussion,” said Thompson.

CREATE has proved to be a good model, as well, with a similar program under development in Louisiana with the railroads working closely with the Louisiana Department of Transportation and Development to improve the New Orleans rail network.

While Thompson mentions that the CREATE partners appreciate the support received, they aim to be good agents and remain focused on one of the railroads key areas: safety.