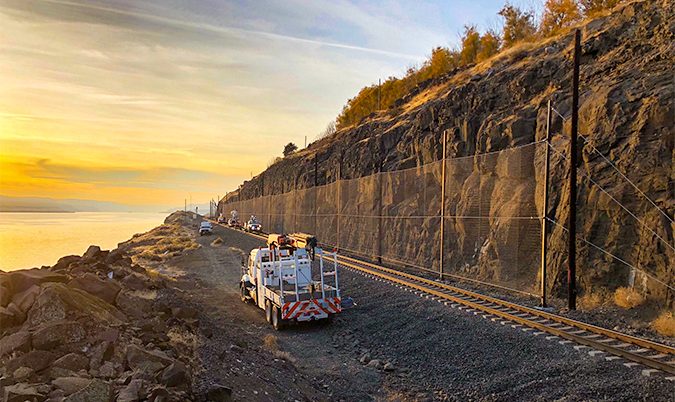 BNSF rock slide warning systems protect the road from damage and blockage, and alert operating leadership to the problem.
BNSF

Most railroads operate through at least some mountainous territory along their lines, but perhaps no road faces a greater challenge than BNSF.

Operating through some of the most mountainous territory in the western U.S., the railroad must constantly be on guard for mud and rock slides, floods, and snow blockages and slides.

BNSF recently published a piece in their “Rail Talk” series that we thought would be of interest to our readers. It’s reproduced below, with permission.

“When mud, rock, water and snow are on the move, sometimes they find their way onto railroad tracks. That has to be resolved promptly so trains can operate safely. Trackside detectors alert BNSF to obstructions that have shifted onto our tracks. These sentinels either set the signals to a restricting state or warn dispatchers, who alert train crews of the potential hazard.

“As a western railroad, we operate trains in rough and remote terrain, including mountains, canyons and deserts. Rocks – some as big as a small car – can occasionally roll onto the track. And while we monitor weather conditions and regularly conduct inspections to ensure the integrity of our network, track-condition detectors provide another layer of safety.”

“The most common type of detector, with more than 220 on our network, is the rock slide detector, also known as a slide fence. A series of wires suspended from poles form the fence.

“When rock or debris breaks one of the wires, an electrical circuit is disrupted, causing signals to go restricting on either side of the obstruction. Once the hazard has been confirmed, trains operating in the area are stopped until the track can be inspected and cleared. Some slide fences have barrier walls as well to stop loose rubble from falling onto the track.

“’The Pacific Northwest is a region where we are particularly susceptible to landslides. Thanks to the efforts of the local Engineering team improving the condition of these detectors, BNSF has been able to reduce service interruptions by 27% over the last two years,’ he said, adding: ‘They’re not only reducing the number of trains we have to hold, but it means we can reduce potential risks to those who restore the track.’”

“Another condition we guard against is slump. This occurs when the ground below tracks shifts due to soft, soggy soil degrading the track’s ability to support a passing train. We use ground-movement detectors, similar to a level, that measure the cross-level of the rail. If there is too much cross-level, an electrical circuit is disrupted, setting nearby signals to a restrictive state.

“Because our railroad parallels rivers in many locations, BNSF strategically places high-water detectors in areas that tend to flood during heavy rains. With this type of detector, when water enters the bottom of the trackside detector, copper electrodes inside short out the electrical current, setting nearby signals to a restrictive state.”

“In addition to flooding, we also deal with hazards caused by the frozen water variety, as in snow slides and avalanches.

“Recently we have begun testing a snow slide detector. These are placed in active areas for avalanches. A network of posts is placed between the track and the path of a potential avalanche. The posts have telemetry sensors in them so when a slide occurs and tilts the pole, the system generates an alarm.”

“The work of finding new and improved techniques to sound the alarm is always under way at BNSF. Fritz’s team is investigating ways to use LiDAR technology to detect rock or other debris. LiDAR stands for Light Detection and Ranging. This system uses a series of scanners to sweep infrared light beams over the top of the rail. If the beams reflect off an object of sufficient size, a warning is activated.

“Fiber optics are also being tested, by installing buried fiber along the tracks. When a rock falls, it causes an imperfection in the system to be detected, providing an exact location of the event.

“While technology does its part to protect our track and trains from ground movement and high waters, teams of employees lead the effort. Our signal maintainers test, maintain, replace or repair our signal and communications systems. Our track inspectors and drone teams regularly inspect every section of our network as well.

“Mudslides, floods and avalanches are a fact of life that railroaders have to contend with. But when earth’s natural processes present challenges to the operation of our network, we have the teams and technologies in place to keep trains moving.”