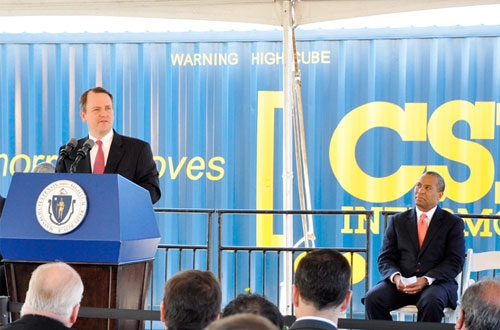 In Massachusetts, an agreement with CSX Corporation was completed that paves the way for increased commuter rail service expected to begin October 29, 2012 and strengthens the state's rail freight network to support the region's economy.

After years of negotiations and multiple phases achieved through the commonwealth’s historic agreement with CSX, Massachusetts Lieutenant Governor Timothy Murray was joined by Massachusetts Department of Transportation (MassDOT) Secretary and CEO Richard Davey and officials from CSX Corporation, to officially accept the “keys” for ownership of the rail tracks and operations along the Framingham/Worcester line on behalf of the Patrick-Murray Administration and the commonwealth.

Now finalized, the agreement between CSX and the commonwealth provides the commonwealth ownership of the rail tracks and control of operations along the Framingham/Worcester line, allowing greater opportunities for MassDOT to improve service and increase service between Boston and Worcester, the state’s first and second largest cities, respectively. The commonwealth will immediately increase commuter rail service on the Framingham/Worcester line between Boston and Worcester with the addition of three new inbound and three new outbound trains between the two cities for a total of 31 stops arriving or departing Worcester station. The lieutenant governor also announced that MassDOT will add one inbound special express and one outbound special express in the spring of 2013 and will reach the goal of 20 round trips by October 2013.

“Since the restoration of limited commuter rail service to Worcester in 1994, the importance of linking New England’s two largest cities by passenger rail has been clear,” said Lieutenant Governor Murray. “This finalized agreement with CSX marks a major milestone for transportation in Massachusetts as we deliver enhanced services for the growing demand of riders and support business and community development in the Worcester and Metrowest areas.”

In addition to increased commuter rail service, through the finalized agreement with CSX, the commonwealth will take control of maintenance of the right-of-way and begin the dispatching transition so that all Worcester Line trains are dispatched from MBTA facilities.