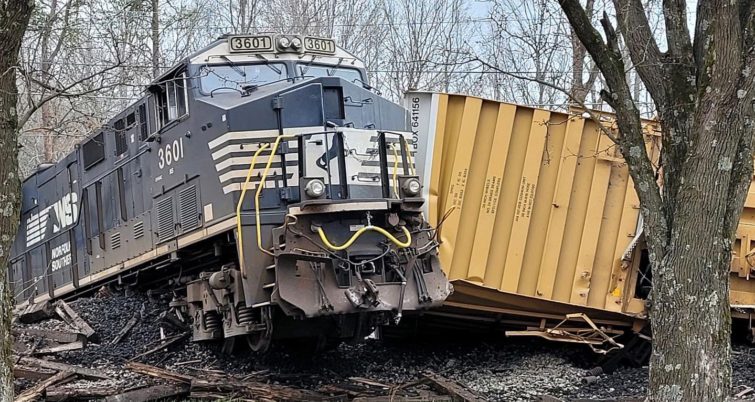 Chattanooga-area police and fire officials alerted the public of a Norfolk Southern train collision and derailment that occurred during the afternoon of Dec. 20, leaving two NS crew members with minor injuries.

RT&S has learned that the crew of the Norfolk Southern train in this report has been released from the hospital and the line has reopened. DCL

The NS train collided with a truck carrying a 134-foot-long concrete bridge beam and derailed, according to a local news report. The NS crew members were treated for their injuries at a local hospital, and the driver of the truck was not injured.

“Earlier today, a train hit a bridge beam that was en route to the SR 317 reconstruction project, resulting in a derailment,” said Rae Anne Bradley, community relations officer for the Tennessee Department of Transportation, via Twitter on Dec. 20. “Both roads are closed in this area. Consider an alternate route. This will be a lengthy closure.”

The derailment took place in the Chattanooga suburb of Collegeville and affected three locomotives and 10 cars. The incident was located at University Drive and Apison Pike, according to the Collegedale Police Department.

Chattanooga Fire Department personnel said via Twitter that the truck had been stopped on the tracks while waiting for a traffic light. When the crossing gates activated for an approaching train, the truck was unable to cross before the collision took place.

Chattanooga fire officials also took to Twitter to explain that local fire personnel were working to stop a diesel and lube oil leak from two of the locomotives later in the afternoon of Dec. 20. No other hazardous materials were identified by officials at the time, the department said.

“Train cars have been taken off the tracks [and] new rails have been laid down near the intersection of Apison Pike [and] University Drive,” Collegedale police said Dec. 21 via Twitter. “Trains are cautiously being allowed through the area [and] they have told us that they hope to have the crossing open to vehicle traffic this afternoon.”