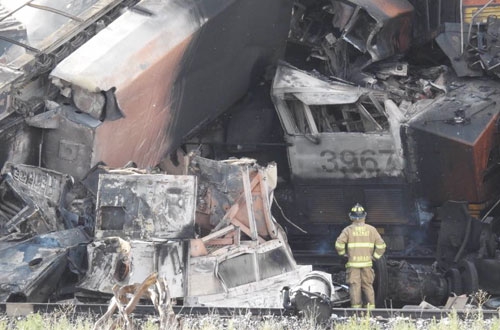 The National Transportation Safety Board (NTSB) has taken control of the investigation into the June 28, 2016 accident between two BNSF intermodal trains near Panhandle, Texas.

The head-on collision sparked a fire and left one crew member injured, two dead and one remains missing. In a statement, BNSF said it was deeply saddened and noted that families of the dead employees have been notified, but BNSF is not publically releasing their names out of respect for the families’ privacy.

“The entire BNSF family is terribly saddened by this event and we extend our deepest sympathy and thoughts to the families and friends of the employees involved in this incident. This is an extremely difficult time and our entire organization grieves for the loss of our colleagues,” said Carl Ice, president and chief executive officer.

During a press briefing, Richard Hipskind, NTSB investigator in charge, said, “Our mission is to understand not just what happened, but why it happened and make recommendations or changes to prevent it from happening again.”

He said the trains involved did have digital recorders on board, but noted the fire may have damaged those recorders and NTSB is still working to recorder any preserved information.