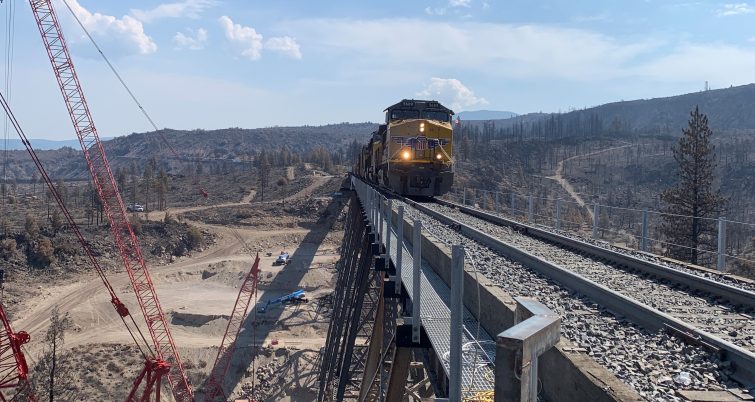 After weeks of battling wildfires and floods, Union Pacific is seeing a bit of a reprieve from the fires. RT&S has reported on this situation for the past several weeks, and it's nice to share some good news on this front.

The vital I-5 route connecting Roseville, California, and Portland, Oregon, has been closed since the Lava Fire ignited the bridge in late June. Although initially estimated to reopen Sept. 1, Operating and Engineering’s around-the-clock efforts to repair the damage at Union Pacific’s own expense enabled the first train to cross the reconstructed bridge Aug. 1.

Five trains crossed the bridge during its soft opening on Sunday before Engineering completed surfacing work and additional inspections overnight. The bridge was officially put back into service at 7 a.m. Aug. 2 but maintains a five-hour daily curfew over the next eight days.

Union Pacific also reported that they reopened their line impacted by the Dixie fire on Sunday evening. And, while they have reopened across the areas impacted by the wildfires, they continue to work closely with the California Department of Forestry and Fire Protection to minimize any potential fire damage. Firefighters also continue to ride the railroad’s water trains and assist their crews in protecting structures.