The U.S. Department of Transportation’s (USDOT) Pipeline and Hazardous Materials Safety Administration (PHMSA), in coordination with the Federal Railroad Administration (FRA), announced that it is publishing a notice of proposed rulemaking (NPRM) regarding the transportation of liquefied natural gas (LNG). The proposed rule will seek comment on changes to the Hazardous Materials Regulations (HMR) to authorize the transportation of liquefied natural gas (LNG) by rail in the DOT-113 specification tank cars.

The NPRM “is a result of President Trump’s April 2019 Executive Order recognizing the leading role the U.S. plays in producing and supplying LNG and the need to continue to transport this energy resource in a safe and efficient way. Under Secretary Elaine L. Chao’s leadership, the Department has prioritized safety as well as supporting the economic benefits of enhanced transportation options for American energy resources,” USDOT noted.

The Executive Order “recognized the growth of energy production in the U.S., coupled with a growing domestic and international demand for natural gas. Transportation of LNG by rail is a potentially viable alternative to pipelines, which are not always able to meet the demand of, or reach, certain areas in the U.S. that are accessible by rail. Additionally, there are many potential benefits of transporting LNG by rail, including the safety benefits inherent to rail transport and the use of approved tank cars, fuel efficiency, fuel accessibility to remote regions, increased U.S. energy competitiveness and fewer emissions.”

During the comment period, USDOT said it will continue to collect and analyze data on rail cars, ensuring that any rulemaking will utilize the latest data in establishing safety standards.

More information on the proposed rulemaking can be found here.

“Safety is the number one priority of PHMSA and we understand the importance and will make it a top priority to evaluate all public comments and concerns raised throughout the rulemaking process,” said PHMSA Administrator Skip Elliott. “This major rule will establish a safe, reliable and durable mode of transportation for LNG, while substantially increasing economic benefits and our nation’s energy competitiveness in the global market.”

Association of American Railroads traffic report for March and the week ending March 28, 2020 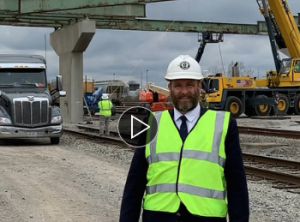 Coronavirus could impact financial returns according to Union Pacific, CSX

Program designed to bring together rail-service sites and customers launched