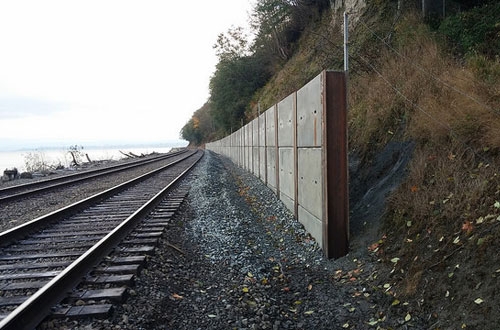 A finished metal and concrete landslide retention wall that WSDOT constructed in 2014 to help keep debris from covering tracks.
WSDOT

The Washington State Department of Transportation (WSDOT) is spending $16.1 million in federal funds on slide management projects to help shore up slopes along rail lines. Six historically slide prone sites were selected for work. Two projects were completed in 2014. This summer and early fall, work will take place at three sites near Mukilteo and one near Everett.

WSDOT notes that while there can never be absolute guarantees when dealing with landslides, the work is designed to help reduce landslides and/or minimize their damage to rail lines. The two stabilization projects completed near Mukilteo in 2014 did not have any landsides during the subsequent fall/winter rainy season.

WSDOT, Amtrak, BNSF, Sound Transit and other partners formed the Landslide Mitigation Work Group in 2013. The group has researched historical slide locations and causes along coastal bluffs and used that data to identify the six project sites. The group also meets with local governments and citizens about ways landowners can help prevent slides on their property.

In the past 10 years, there have been more than 200 landslides along the Seattle to Everett coastline. Each slide that covers or disturbs rail lines triggers a mandatory 48-hour halt to passenger train traffic while BNSF clears tracks and ensures the area is stable. 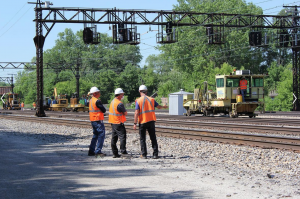