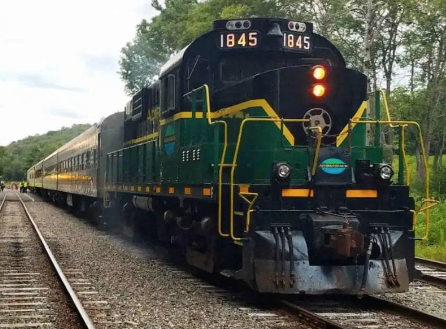 The Adirondack Railroad has been operating since 1992.

GoFundMe pages have become increasingly popular over the years in an attempt to make money fast for a service or a cause. The Adirondack Railroad offers a service, so why not turn to social media?

The state of New York is funding a rehabilitation effort that will extend service up to Tupper Lake. Rails will be restored between Big Moose and Tupper Lake. Work is expected to be complete by November 2021.

However, the expanded service also will require more equipment, and the Adirondack Railroad started a GoFundMe campaign to raise money for another locomotive and a hi-rail truck. As of April 21, a little over $1,000 of a $90,000 goal had been raised in 29 days from 11 donors.

Railway Track & Structures magazine tried to get an update on the account, but it has since been removed.

The original track was laid by the New York Central Railroad line, which connected Utica with Montreal. The service lasted until 1953, and passenger line ended in 1966. Freight used the rail up to 1972. The line was brought back to life by a group of investors for the 1980 Lake Placid Winter Olympics, but the service only lasted two years. Adirondack Railroad has been offering scenic rides since 1992.