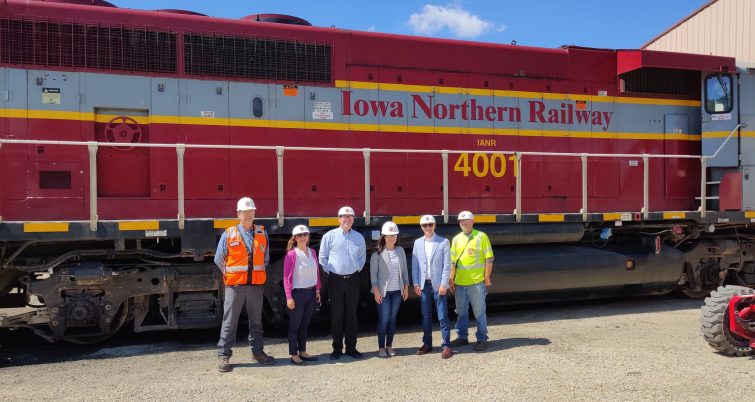 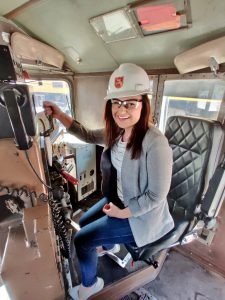 Rep. Finkenauer (IA-1) sees firsthand the operations of Iowa Northern Railway from the cab of a locomotive.

U.S. Representative Abby Finkenauer (IA-1) continued her infrastructure tour through Iowa’s 1st congressional district at Iowa Northern Railway Company on Tuesday. Alongside officials from Iowa Northern and GoRail, the congresswoman toured the railroad’s operations center and rail yard, as well as trying her hand at a locomotive simulator. Iowa Northern, a short line railroad that runs diagonally through Iowa from Manly to Cedar Rapids, handles over 60,000 cars per year.

“Railroads, from the short line operators like Iowa Northern to the largest Class I companies, are critical connectors for our state’s exports—from Iowa corn and farm products to ethanol and manufactured goods,” said Rep. Finkenauer, who serves on the House Small Business Committee in addition to the House Transportation and Infrastructure Committee. “I’m grateful to get a first-hand look at the operations of an Iowa small business and learn more about our freight rail ecosystem across the country.”

Rep. Finkenauer is a co-sponsor of the bipartisan-backed House bill (H.R. 510) to make the Short Line 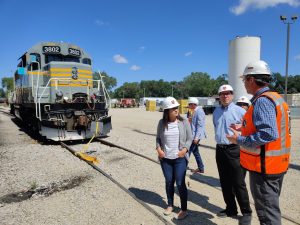 Tax Credit permanent. Commonly referred to as 45G, this tax credit has enabled short line railroads like Iowa Northern to privately invest over $4 billion since its inception. The credit, which has been expired since December 31, 2017, not only bolsters safety by helping small railroads upgrade rail lines, it also helps them boost efficiency while providing crucial first- and last-mile service.

“We’re proud of the work we do every day to connect the Iowa economy to markets across the state, nation and beyond,” said Daniel R. Sabin, president of Iowa Northern. “With three Class I rail interchanges, our customers—including 20-grain elevators, two ethanol plants two mineral processing facilities and many other commodity shippers—have access to the entire North American rail network.”

The North American rail network is comprised of seven Class I railroads and 603 short line and regional railroads. Partnering with the Class Is, short lines haul one in every five rail carloads. Together, the nation’s freight railroads move about a third of both U.S. exports and intercity freight—spurring economic development, more jobs, less congestion and infrastructure damage, and fewer greenhouse gas emissions.

In addition to 45G, the group discussed the freight rail policy landscape, including the importance of maintaining a balanced approach to rail regulation that allows railroads to continue to reinvest in the nationwide rail network.

“For their part, America’s Class I railroads have spent about $25 billion annually on their networks in recent years, investments that support 1.1 million U.S. jobs and generate $200+ billion in economic output each year,” said Emily Traiforos, Iowa State Director for GoRail. “The tour today helped showcase how each U.S. railroad, big or small, is an integral connection in the rail network that delivers for America’s economy.”